During their tours, the settlers performed Talmudic rituals in total provocation to Palestinian worshipers.

The Israeli occupation police on Monday banned the entry of two Palestinians working as guards at the Aqsa Mosque from entering the holy site for two weeks.

According to Wadi Hilweh Information Center, the Israeli police released Aqsa guard Ahmed al-Awar after detaining him for one day and ordered him to stay away from the Mosque for 15 days.

Awar was physically assaulted during his detention by police officers on Sunday at the Aqsa Mosque.

The police also imposed a similar entry ban on Aqsa guard Mohamed al-Salehi after releasing him.

On Monday morning, the Israeli police allowed over 1,450 Jewish settlers to desecrate the Aqsa Mosque, perform rituals and behave provocatively as they were touring its courtyards, which caused a lot of tension and prompted the Mosque guards and officials to intervene.
Israeli Soldiers Abduct 19 Palestinians In The West Bank 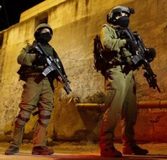 The Palestinian Prisoners’ Society (PPS) has reported that Israeli soldiers have abducted at least nineteen Palestinians from their homes in several parts of the occupied West Bank, during extensive and violent searched of homes.

The soldiers invaded many communities in several governorates of the West Bank, and interrogated many Palestinians while violently searching their homes before abducting nineteen Palestinians, including former political prisoners.

Thirteen of the abducted Palestinians have been identified as:

Israeli police arrested on Monday 14 Palestinians after attacking a peaceful march organized in occupied Jerusalem in protest against US embassy relocation.

Tight military restrictions were earlier imposed throughout the occupied city prior to the opening ceremony of the US embassy in occupied Jerusalem.

A large protest was organized near the new US embassy building in the occupied city amid the participation of a number of Arab members of the Israeli Knesset.

At least 14 protesters were detained while others were injured during the attack. Palestinian flags were also confiscated by Israeli police.

Tension in the occupied Palestinian territories continue to be high in rejection of the opening of the US embassy in Jerusalem and marking the 70th anniversary of the Palestinian Nakba, or catastrophe.
Palestinians arrested, MP’s home ravaged by Israel army in dawn sweep

A number of Palestinians were kidnapped by the Israeli occupation forces (IOF) at daybreak Monday in abduction sweeps rocking West Bank provinces.

The occupation forces kidnapped four Palestinian young men from Nablus shortly after rolled into the city and raked through residential neighborhoods.

The list of arrestees included ex-prisoner Alaa Hmeidan, from al-Ma’ajeen neighborhood, in Nablus. Hmeidan had served as the head of the Islamic Bloc at An-Najah University.

At the same time, an Israeli military patrol stormed the home of the Palestinian MP Nizar Ramadan in Senjer area, near al-Khalil’s town of Dura, in the southern occupied West Bank.

Ramadan said on his Facebook account that Israeli soldiers wreaked havoc on his family home and interrogated his relatives.

MP Ramadan had been held for 10 years in Israeli jails.

Three Palestinian young men were arrested by the Israeli forces on Sunday evening in Silwan town, south of Occupied Jerusalem.

At the same time, the Israeli authorities extended the remand of the Secretary of Fatah Movement in Occupied Jerusalem, Shadi Matour, until Monday.

Meanwhile, fierce clashes burst out between Palestinian anti-occupation youth and Israeli patrols in Silwan, according to the Wadi Hilweh Information Center.

The clashes culminated in the abduction of two Palestinian young men from Ras al-Amoud neighborhood, in Silwan.

Israeli soldiers abducted, on Monday at dawn, six Palestinians, including a child, and summoned a woman for interrogation, in several parts of the occupied West Bank.

The soldiers also abducted a child, identified as Ashraf Gheith, 13, from his home in the ath-Thoury neighborhood in Silwan town, south of the Al-Aqsa Mosque in occupied Jerusalem.

Also in Silwan, the soldiers invaded the home of a local teacher, identified as Hanadi al-Halawani, and summoned her for interrogation.

In Hebron, in the southern part of the West Bank, the soldiers also invaded and searched homes and abducted Nour Abdul-Fattah al-Qawasmi and Mohammad Abu Fannouna.

In addition, the soldiers invaded Dar Salah village, east of Bethlehem, before storming and ransacking many homes.

A Palestinian university student was kidnapped by the Israeli occupation forces afternoon on Sunday at a military checkpoint set up north of al-Khalil province, in the southern West Bank.

A PIC news correspondent said Palestinian student Khalil Adawi was kidnapped by Israeli soldiers at a flying checkpoint pitched east of Halhul, in northern al-Khalil, where Palestinian civilians and drivers have been subjected to intensive inspection.

Adawi, enrolled at the Quds Open University, was dragged to an unidentified destination.
13 may 2018
Israeli Soldiers Abduct Seventeen Palestinians In The West Bank 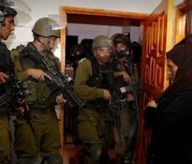 Israeli soldiers abducted, on Sunday at dawn, at least seventeen Palestinians from their homes in several parts of the occupied West Bank, the Palestinian Prisoners’ Society (PPS) has reported.

In Ramallah, in central West Bank, the soldiers abducted Mahmoud Emad Rimawi, 20, from his home in Beit Rima town, northwest of the city, after breaking into his home, and caused many Palestinians to suffer the effects of teargas inhalation, in Nabi Saleh nearby town.

In addition, the soldiers also abducted a young man, identified as ‘Awwad Hamed, from his home in Silwad town, northeast of Ramallah.

In occupied Jerusalem, the soldiers stormed and searched homes and abducted Mohammad Bader and Jawhar Jawhar, from Abu Dis town east of Jerusalem.

Also in Jerusalem, the soldiers abducted a guard of Al-Aqsa Mosque, identified as Mohammad Salhi, after repeatedly assaulting him. video

His abduction came after more than 500 Israeli colonialist settlers and soldiers invaded the holy site, while many colonists raised Israeli flags and conducted provocative tours. Video

It is worth mentioning that the Palestinian Detainees’ Center for Studies has reported that the soldiers abducted 450 in the West Bank and the Gaza Strip, including 90 children and 11 women, in April. 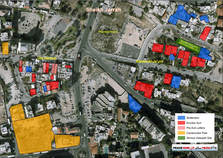 Israeli soldiers abducted, on Sunday at dawn, one Palestinian in Beit Rima town, northwest of the central West Bank city of Ramallah, and injured several others in Nabi Saleh nearby village.

The Palestinian Prisoners’ Society (PPS) has reported that the soldiers invaded and searched homes in Beit Rima, and abducted Mahmoud Emad Rimawi, 20.

The soldiers also invaded Nabi Saleh village, and fired many gas bombs and concussion grenades at Palestinian protesters, causing many to suffer the severe effects of teargas inhalation.
12 may 2018
Army Abducts Three Palestinians In Jerusalem, One In Jenin

Israeli soldiers abducted, on Saturday at dawn, three young Palestinian men in occupied East Jerusalem, and one near Jenin, in northern West Bank.

The soldiers interrogated them and their families, while searching their homes, and took them to an interrogation center in the city.

The Israeli Occupation Forces (IOF) carried out at dawn Saturday large-scale raid and search campaign throughout West Bank. At least one ex-prisoner was detained during the raids.

In Nablus, Israeli forces arrested an ex-prisoner and confiscated his mobile phone after breaking into his family house.