17 may 2018
Israeli Soldiers Abduct 14 Palestinians, Including A Legislator, In The West Bank 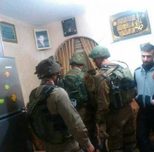 Updated: Israeli soldiers invaded, on Thursday at dawn, many Palestinian communities in several parts of the occupied West Bank, violently searched homes and abducted fourteen Palestinians, including a legislator.

Tafesh was repeatedly abducted and imprisoned by Israel, including being held for extended periods under Administrative Detention orders, without charges or trial.

Also in Bethlehem, the soldiers invaded the Saff and al-Maslakh streets, searched many homes and abducted Mohammad Waleed al-Hreimi and Issa Nader Awwad.

Among the abducted Palestinians in Bethlehem is Issa Awad, who was previously shot by the army during a military invasion into Bethlehem.

The soldiers also fired gas bombs, concussion grenades and rubber-coated steel bullets at many Palestinians, who protested the invasion and hurled stones at the invaded jeeps.

In addition, the soldiers abducted a young man, identified as Ibrahim Marwan Hanaisha, 26, from Jenin, in northern West Bank, after summoning him for interrogation in Salem military base, west of Jenin.

In Tulkarem, also in northern West Bank, the soldiers abducted Husam Khaled Tammam, 34, from his home.

Civilians arrested, homes ravaged in predawn sweep by Israel army
A number of Palestinians were kidnapped by the Israeli occupation forces (IOF) at daybreak Thursday in abduction sweeps rocking the West Bank.

A set of flying checkpoints was abruptly pitched by the occupation soldiers in al-Jabal al-Shemali area.

At the same time, the Israeli forces closed off the main entrance to the Fawar refugee camp, south of al-Khalil, with metal gates following fierce clashes with Palestinian anti-occupation youth.

Eye-witnesses said a flock of military vehicles broke into the Fawar camp overnight, sparking terror in the area.

The IOF sealed off the main entrance to Wad al-Gharous, near the illegal Israeli settlement of Kiryat Arba, built on Palestinian land east of al-Khalil.

Meanwhile, 20-year-old Luay Sultan was kidnapped by the IOF on his way back home.

The young man was reportedly beaten by Israeli settlers shortly before his arrest.
Palestinian sick prisoner complains of maltreatment

Israel’s Nahshon forces obliged a Palestinian sick captive, Mohammad al-Khatib, to walk while both his hands and feet were tied during his transfer to receive treatment.

Palestinian Prisoner Society said, in a statement on Wednesday, that detainee Khatib, 47 of Bethlehem, suffers from walking difficulty as a result of being injected with wrong medication in Nafha jail in late 2017.

He was forced to walk quickly by the Israeli prison unit the Nahshon, which is notorious for torturing Palestinian prisoners.

The statement pointed out that captive Khatib is serving a life sentence plus 20 additional years. He has been detained since 2006.
Illegal Israeli Colonizers Occupy An Archeological Palestinian Home In Hebron

A group of extremist illegal Israeli colonizers, living on Palestinian lands in the southern West Bank governorate of Hebron, occupied on Wednesday evening an archeological Palestinian home in Doura city, south of Hebron.

Media sources in Hebron said the colonizers invaded Ein ad-Dalba area, near the eastern entrance of Doura, and occupied the archeological home, owned by al-Harbiyyat family, and raised Israeli flags on the property and around it.

Israeli soldiers were deployed in the area, and did not attempt to remove or stop the invaders, but instead prevented the Palestinians from entering the area.

The head of “Kan’aan’s Sons Society for Heritage Conservation” Yousef Nassar, said there are many ancient and archeological homes extending on the main road between Hebron city and its southern areas, and are all a constant target by the illegal Israeli colonialist settlers.

He added that the family has the official deeds proving ownership of the property, dating backing to the Ottoman era.

In related news, Israeli soldiers abducted, on Wednesday evening, Luay Hani Sultan, 20, from al-Boweira area, east of Hebron, after repeating beating him up.
16 may 2018
Detainee Continues Hunger Strike For The 27th Day

Yousef Nasasra, a lawyer with the Palestinian Detainees’ Committee, said that a detainee, identified as Ebaa’ Omar Barghouthi, 40, is ongoing with a hunger strike he started 27 days ago, protesting being held under arbitrary Administrative Detention orders, without charges or trial.

Nasasra said Barghouthi is held at Ohali Kidar Israeli prison, in Be’er as-Sabe’ (Beersheba), and is refusing checkups, or any sort of medications.

The detainee recently started vomiting blood, in addition to severe abdominal pain and migraine, and became very weak in addition to repeatedly having high fever.

The soldiers frequently invade and search his very small cell, and took his clothes, except what he is wearing.

It is worth mentioning that Barghouthi was abducted on August 2nd 2017, and received a six-month Administrative Detention order, and was renewed it for four additional months, without charges or trial.
Jaffa residents protest clearing of ancient Muslim cemetery

Cemetery was uncovered three weeks ago during construction works at the corner of Elisabeth Bergner and Nahum Goldmann streets; local residents demonstrate against removal of tombstones, calling out 'Allahu Akbar,' one detained for disturbing the peace.

Jaffa residents arrived at the scene as employees were removing the tombstones from the burial plot to protest the move, calling out "Allahu Akbar."

One protester was detained for questioning for disturbing the peace.

The ancient Muslim cemetery was uncovered last month by power shovels digging at the construction site. The workers began gathering the bones into cardboard boxes and buckets, intending to continue the works, but local residents led by the Islamic Movement in Israel began demonstrating against the move.

A representative of the Tel Aviv-Jaffa municipality who arrived at the site, accompanied by police forces, ordered the immediate halt of works, which satisfied the protesters.

After works were halted, several residents came to the scene, spray-painting the fence of the construction site with "Sacred place - digging is forbidden."

On Friday, Jaffa residents, including representatives of the Islamic Movement in Israel, arrived at the ancient cemetery and set up signs around it saying "Cemetery - sacred grounds." They also poured concrete over the graves, creating tombstones.

The municipality considered the move an invasion of land it owns and ordered the removal of the concrete tombstones before facts-on-the-ground could be set.

According to construction plans, a three-floor structure is supposed to be erected at the site, which will house a homeless shelter, offices and a commercial complex.
Israeli Soldiers Abduct Sixteen Palestinians In the West Bank

Israeli soldiers abducted, on Wednesday at dawn, at least sixteen Palestinians from their homes, in several parts of the occupied West Bank, including Jerusalem, after invading and violently searching their homes, the Palestinian Prisoners’ Society (PPS) has reported.

In Ramallah in central West Bank, the soldiers abducted Issam Abu Alia, from the al-Mughayyir village, east of the city, in addition to former political prisoner Mo’men Zeid from the al-Jalazoun refugee camp, north of the city, Mohammad Hamed, from Beitin town, east of Ramallah, and Aseed Abu Odai from Kafr Ni’ma, west of the city.

The army also invaded a residential building in the al-Masayef neighborhood, in Ramallah city, before violently searching many flats, and interrogated several Palestinians while inspecting their ID cards.

In Hebron, in the southern part of the West Bank, the soldiers abducted three Palestinians in Shiokh al-‘Arroub village, and the al-‘Arroub refugee camp, north of the city.

Furthermore, the soldiers stormed a building facing the al-Fawwar refugee camp, south of Hebron, raised Israeli flags on its rooftop, and used it as a military tower.

The army also said a Palestinian hurled a hand grenade at one of its military vehicles in the refugee camp.

In related news, the army claimed its soldiers found weapons, and confiscated cash, during searches of homes and property in Beit Sahour and Beit Fajjar, in the West Bank governorate of Bethlehem.

The PPS said that the soldiers abducted, on Tuesday, 38 Palestinians in several parts of the West Bank, and added that the army also abducted 551 Palestinians, including 124 children and nine women, in April.
Soldiers Injure 173 Palestinians, Abduct Two, Near Nablus

Israeli soldiers shot, Tuesday, two Palestinians with live fire and 71 with rubber-coated steel bullets, in addition to causing approximately 100 to suffer the effects of teargas inhalation, and abducted two others, in Nablus governorate, in the northern part of the West Bank.

Medical sources said the soldiers attacked hundreds of protesters, who marched in the al-Lubban ash-Sharqiya village, and near Huwwara military roadblock, south of Nablus, marking the Palestinian Nakba, and the ongoing illegal Israeli occupation of Palestine.

The soldiers also attacked protesters in Beita village, south of Nablus, in addition to Azmout and Beit Forik, east of Nablus, and Deir Sharaf, west of the city.

Ahmad Jibreel, the head of the Emergency Unit of the Red Crescent Society, said the soldiers shot two Palestinians with live fire, and 69 others with rubber-coated steel bullets, in addition to causing approximately 100 to suffer the effects of teargas inhalation.

The soldiers also abducted Mohammad Nubani, 23, and Kamal ‘Oweiss, and took them to an unknown destination.

In related news, the soldiers attacked dozens of nonviolent protesters in Budrus village, northwest of the central West Bank city of Ramallah, after the army attacked a symbolic “Right of Return Camp,” causing several injuries.