The Palestinian Prisoner Society (PPS) on Monday said that four Palestinian prisoners have been on hunger strike for different periods in Israeli jails in protest at their administrative detention.

The PPS said that prisoner Hasan al-Awiwi, who started his hunger strike 56 days ago, was transferred to hospital on Sunday as his health condition has severely deteriorated.

Al-Awiwi, 35, a father of three, is an ex-prisoner who was re-arrested on 15 January.

On 18 May, Thaer Bader, 43, joined the hunger strike for the same reason. Bader was supposed to be released on 14 May after he had served several years in Israeli jails, but the Israel Prison Service decided to hold him without charge or trial.

Bassam Abu Akar, a father of seven, has spent a total of 24 years in Israeli lock-ups. He started a hunger strike on 21 May against his administrative detention for the second year in a row.

Ahmad al-Horoub, 30, an ex-prisoner, has been on hunger strike since 21 May.
Israel releases former Israeli-Arab MK who smuggled phones to terrorist

Basel Ghattas leaves prison after serving a two-year-sentence for smuggling electronic, communication devices to security prisoner Walid Daka in Ktzi'ot Prison back in 2016

An Israeli-Arab politician who was convicted for smuggling cell phones to a security prisoner two years ago, was released from jail Monday morning.

Former MK Basel Ghattas (Joint Arab List) was arrested back in 2016 after being smuggling communication devices to a convicted terrorist Walid Daka in Ktzi'ot Prison.

Ghattas subsequently confessed to breach of trust, providing means to carry out acts of terrorism, smuggling electronic devices into prisons and transferring encrypted messages between security prisoners. He was officially convicted in March 2017.

The former MK received a two year sentence by the Be'er Sheva Magistrate's Court in April 2017 following the approval of a plea bargain in which he showed no remorse for his actions, instead justifying them on humanitarian grounds.

In addition, he was fined NIS 120,000 and given a probationary period of 18 months once he is released from prison.

Ghattas began his sentence on July 2, 2017 when he entered the Gilboa Prison amid a media frenzy. “I am entering prison with my head held high,” he said - in both in Arabic and Hebrew - to a crowd of journalists before entering the prison. “I will leave prison in two years upright … I will continue to protect the rights of prisoners and bring their cases to the public agenda."

The 63-year-old then moved around between several prisons before eventually settling in Megiddo Prison, from where he was released.

In November 2018, Ghattas submitted a request for early release. The parole board denied his request, claiming the former politician’s offences were extremely serious and intended to harm the security of Israel and its citizens.

The board also claimed Ghattas was not involved in a rehabilitation process while in prison, and did not express any verbal remorse over his actions.
Eight Palestinians kidnapped by IOF in W. Bank

A statement by the Israeli army claimed that eight wanted Palestinians were arrested in the West Bank overnight.

According to local sources, the IOF kidnapped four citizens during campaigns in different areas of al-Khalil.

Another one identified as Humaida Tahaina was taken prisoner following an IOF raid on his home in Jenin city.

Three others were kidnapped from their homes in Deir Abu Mash’al village, north of Ramallah, and Haitham al-Faqih from Qatanna town, northwest of Jerusalem.
Two Jerusalemites banned from entering Aqsa for several days

The Israeli occupation police on Sunday evening banished two Jerusalemite young men from the Aqsa Mosque for two weeks as a condition for their release.

According to Wadi Hilweh Information Center, the Israeli police released on bail Ibrahim Khalil and Musaab Duweik from Jerusalem on condition that they stay away from the Aqsa Mosque for 14 days

The Israeli police accused Khalil and Duweik of chasing settlers as they were touring the Aqsa Mosque.
Jordan condemns ongoing Israeli violations against Aqsa

Jordan's Foreign Ministry on Sunday strongly denounced the ongoing Israeli violations against al-Aqsa Mosque and the restrictions on worshipers and Awqaf personnel.

The ministry's spokesperson Sufyan Qudah said Israel, as an occupying authority, must abide by its obligations in accordance with international law and respect the historical and legal status of al-Aqsa Mosque and the feelings of Muslims, especially during the last 10 days of the holy month of Ramadan.

Qudah called on the Israeli authorities to immediately halt their provocative practices, and held them responsible for the safety of the holy site and the worshipers.

Earlier on Sunday, the Israeli occupation police arrested three Palestinian worshipers inside al-Aqsa Mosque's compound after violently beating them, while dozens of Jewish settlers broke into the site and roamed its courtyards freely under police guard.
Detainees in Etzion Suffering Deplorable Conditions

The Palestinian Authority’s Detainee and Ex-Detainees Commission said, today, that Palestinian political detainees in the Israeli prison of Etzion, near Bethlehem city, in the occupied West Bank, have been suffering unbearable imprisonment conditions, particularly with regard to the meals they get for the break of their daily Ramadan fast.

According to the Commission, instead of fasting only from sunrise to sunset every day, during the holy month of Ramadan, the detainees are compelled to fast for many consecutive days without a break because of the extremely bad meals – in terms and quality and quantity – they get from the prison administration, which has forced many of the prisoners to refuse to receive them.

For instance, the Commission adds, the prison administration provides the prisoners with badly-cooked food, such as rotten boiled eggs that are cooked a long time before being served to the prisoner.

WAFA further reports that the Commision has called on international human rights organizations to intervene in putting an end to Israel’s ill-treatment of the Palestinian political detainees, and to allow them access to good food and cold water, especially during Ramadan and the current unbearable weather conditions.
26 may 2019
Israeli Soldiers Abduct Ten Palestinians In The West Bank

The Palestinian Prisoners’ Society (PPS) has reported that Israeli soldiers abducted, on Sunday at dawn, ten Palestinians from their homes, in several parts of the occupied West Bank.

Furthermore, the soldiers abducted Na’im Salah, from the al-Khader town, south of Bethlehem.

The Quds News Network has reported that the soldiers abducted Zidan Sharabati, and his brother, Mofeed, from Shuhada Street, in Hebron city. Video

In related news, the soldiers closed many roads near Qalqilia, in northern West Bank, before stopping and searching dozens of cars, and interrogated many Palestinians while inspecting their ID cards.

The Palestinian Detainees’ Committee has reported, Sunday, that a detainee from Hebron, in the southern part of the occupied West Bank, is ongoing with hunger strike, in an Israeli prison, for the fifth day.

The Committee stated that the detainee, Ahmad Khader al-Hroub, 30, from Deir Samit town, west of the southern West Bank city of Hebron, started his strike immediately after Israeli soldiers abducted him on May 21, 2019.

It added that al-Hroub is a former political prisoner, who was held by Israeli for two years, under the arbitrary Administrative Detention orders, without charges or trial. 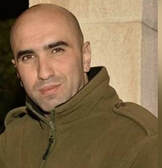 Palestinian prisoner Hasan al-Awiwi, a 35-year-old from al-Khalil, has entered day 56 of his open-ended hunger strike in an Israeli jail.

Despite the hot weather, prisoner Awiwi insists on continuing his hunger strike to pressure his jailers to end his illegal administrative detention.

During the holy month of Ramadan, the prisoner breaks his fasting with only salted water, although his health has sharply declined.
Israel arrested 16,500 Palestinian children since 2000

A new study revealed that about 16,500 Palestinian children have been arrested by the Israeli occupation since the outbreak of the Second Intifada on 28 September 2000.

The 26-page study was prepared by the Palestinian ex-prisoner and researcher at the Detainees and Ex-Detainees Affairs Commission Abdul-Naser Farwana about the Palestinian children arrested by the Israeli occupation.

Farwana said that during the past decade (2000-2010) at least 700 cases of arrest were documented annually, while the number has jumped to 1,250 in the last eight years.

Farwana added that all facts and statistics have confirmed that there is a systematic arrest policy targeting Palestinian children, and that the numbers of child detainees have increased steadily since 2000 and significantly since 2011.

The police claimed these two young men assaulted settlers living in the neighborhood.

The police also kidnaped a young man called Omar al-Zaghir as he was walking in al-Wad street in the Old City of Jerusalem.

Earlier, police forces brutally assaulted and wounded a group of Jerusalemite young men in al-Wad street in the Old City, rounded up two of them and took them to one of their detention centers.
25 may 2019
Israeli Soldiers Abduct Four Palestinians In Jerusalem

Israeli soldiers abducted, and Friday evening and on Saturday at dawn, four Palestinian men from several parts of occupied East Jerusalem, and took them to detention and interrogation centers in the city.

Media sources said the soldiers invaded and ransacked several homes in the al-Ezariyya town, southeast of Jerusalem, and abducted two siblings identified as Hazem Edkeidik and his brother Ghaleb.

It is worth mentioning that the Wadi Hilweh Information Center in Silwan (Silwanic), said the soldiers abducted, on Friday evening, two young men, identified as Jadallah Rajabi and Yazan Rajabi from their homes in Batn al-Hawa neighborhood in Silwan.
Illegal Colonists Injure A Palestinian Shepherd, Soldiers Abduct One

He added that the colonists assaulted one shepherd, identified as Rabea’ Mahmoud Awwad, causing cuts and bruises.

Israeli soldiers also invaded the area during the attack, and abducted a Palestinian shepherd, identified as Bassem Mahmoud Awwad.