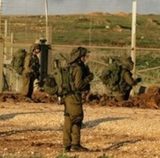 Israeli soldiers abducted, on Thursday evening, two Palestinians, after they reportedly crossed the border fence, in the southern part of the Gaza Strip, while also ‘carrying two grenades” and moved them to an interrogation facility.

An Israeli military spokesperson claimed the two crossed the border fence near Karem Abu Salem (Kerem Shalom) crossing, in the southern part of the Gaza Strip.

The spokesperson added that the soldiers monitored the movements of the two Palestinians, and arrested them after they crossed the border fence, and “found out they were carrying two grenades.”
Israeli Soldiers Abduct 19 Palestinians In The West Bank

The Palestinian Prisoners Society (PPS) has reported that Israeli soldiers have abducted, overnight and earlier Thursday, at least nineteen Palestinians, including two young women, and children, in different parts of the occupied West Bank.

The Jerusalem office of the PPS said the soldiers abducted six Palestinians from the al-‘Eesawiyya town, and Jabal al-Mokabber neighborhood, in occupied Jerusalem, and took them to interrogation centers.

In Bethlehem, the soldiers stormed into and searched many homes, and abducted five Palestinians, including a young woman.

In Hebron, in the southern part of the West Bank, the soldiers invaded and searched homes, and abducted three Palestinians, including a young woman.

They have been identified as Alaa’ Hussam al-Hjouj, 26, Hatem Mahmoud Abu Fannar and Ahmad Khader al-Hroub.

In Jenin, in the northern part of the West Bank, the soldiers kidnapped Fahed Za’rour, and two siblings identified as Ahmad and Khaled ‘Ayed Yahia.

In Tulkarem, also in the northern part of the West Bank, the soldiers abducted Khaled Burhan Abed-Rabbo, 28.

Army Abducts Five Children And A Young Man, In Jerusalem, Three From Jenin

Media sources in Jerusalem said the soldiers invaded and searched many homes in Jerusalem, and abducted five children in the al-‘Eesawiyya town, in the center of the city, and one Palestinian in Jabal al-Mokabber, southeast of the city.

The soldiers caused excessive damage to the searched homes, while many children suffered anxiety attacks.

In related news, the Israeli police abducted two Palestinian workers from the al-‘Arqa village, southwest of Jenin, while working in Um al-Fahm town, in the Haifa District, only twenty kilometers northwest of Jenin.

The two Palestinians, identified as Ahmad ‘Ayed Yahya, 27, and his brother Khaled, 25, were working at a Restaurant, and a carwash facility, in Um al-Fahm.

Army Abducts One Palestinian In Tulkarem

The Tulkarem office of the Palestinian Prisoners’ Society (PPS) has reported that Israeli soldiers abducted, on Thursday at dawn, a young Palestinian man in Tulkarem refugee camp, and searched many homes in Tulkarem city.

The PPS said the soldiers abducted Khaled Burhan Abed-Rabbo, 28, after violently invading his home and searching it, in Tulkarem refugee camp.

The PPS also stated that the soldiers invaded and searched many homes in Thannaba area, east of Tulkarem, and Ertah area, south of the city.

Israeli soldiers abducted, on Thursday at dawn, a young Palestinian woman, and two men, during military invasions into homes, in different parts of the southern West Bank district of Hebron.

The IOA extended the remand of journalist al-Natsha, held in the Israeli Petah Tikva detention center.

The journalist’s brother, Khalil, said the IOA extended his brother’s detention pending further questioning on a reportage he had conducted sometime earlier about force-feeding in Israeli jails. The IOA further justified the decision by resorting to the security file pretext.

Journalist al-Natsha was kidnapped by the Israeli occupation forces from his own family home some ten days ago.
2 Palestinian prisoners released from Israeli jails

The prisoner Rami Dawood, 45, was released after spending more than 14 years behind Israeli bars.

Dawood, from Yatta town south of al-Khalil, was detained in 2002 for resisting occupation.

The female prisoner Arwa Tamimi, 28, was also released from Israeli jails on a bail after 14 days in Israeli detention and investigation centers.

The Israeli Occupation Authorities (IOA) claimed Wednesday evening the confiscation of a truck attempting to carry materials used to build rockets into the blockaded Gaza Strip via the Karem Abu Salem crossing.

The sources claimed that the confiscated materials are scheduled to be used for rocket building.

The Israeli occupation Forces (IOF) launched at dawn Thursday a large-scale raid and arrest campaign throughout the West Bank and Jerusalem.

Local sources told a PIC reporter that Israeli forces broke into Tulkarem refugee camp at dawn today and broke into a local home before deploying throughout its neighborhoods.

Meanwhile, Israeli forces closed the entrance to Beit Azzun town, east of Qalqilia, and carried out combing operations in the area.

Several towns were also stormed and searched in Jenin to the north of the West Bank. An ex-detainee was arrested during the raid.

IOF soldiers were also deployed throughout the neighboring towns in Jenin and erected several checkpoints at their entrances.

Similar arrests were carried out in al-Khalil, where two young men were arrested from their houses in Yatta and Bani Naim towns.

Undercover Israeli soldiers infiltrated, on Wednesday evening, into the West Bank city of Ramallah, kidnapped a young Palestinian man, and took him to an unknown destination.

Eyewitnesses said the undercover soldiers were driving an unmarked car, before assaulting the young man as he was stepping out of a coffee shop, and forced him into their vehicle.