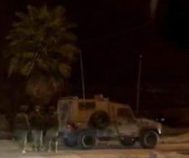 The Palestinian Prisoners Society (PPS) has reported that Israeli soldiers have kidnapped, overnight and earlier Sunday, at least 14 Palestinians in different parts of the occupied West Bank, including Jerusalem.

The PPS said the soldiers invaded Qabatia and Burqin towns, in the northern West Bank city of Jenin, kidnapped four Palestinians, and illegally confiscated a car.

The PPS said the soldiers searched homes in Qabatia town, south of Jenin, and kidnapped Suleiman Ahmad Khozeimiyya, 37, and Nasser Sobhi Tazaz’a, 25, and broke into a car that was parked in Janzour street, before illegally confiscating it.

In Jerusalem, the soldiers invaded and searched many homes in the Old City, and kidnapped Jihad Nasser Qous, Mahmoud Abdul-Latif, and his mother, in addition to Mo’tasem Hajjaj.

In Bethlehem, the soldiers invaded Teqoua’ town, east of the city, and kidnapped Mahmoud Jamal Sabah, 18, after invading his home and searching it.

In addition, the soldiers invaded Silwad town, northeast of Ramallah, searched many homes and kidnapped one Palestinian, identified as Mohammad Abdul-Hamid Hamed.

In Hebron, in the southern part of the West Bank, the soldiers searched several homes and kidnapped three Palestinians, identified a Samer Dweik, ‘Ashour Mohammad Ajlouni and Khaled Mansour Natsha.

On Sunday at dawn, the soldiers invaded Beit Ummar town, north Hebron, searched several homes and broke into a print shop before confiscating a computer.
Girl kidnapped by Israeli police on claims of planning stabbing

The Israeli occupation police on Sunday morning kidnapped a Palestinian girl from Occupied Jerusalem on claims of planning an anti-occupation stabbing attempt.

According to the Israeli TV Channel 7, the Palestinian girl was kidnapped at the crack of dawn from her own family home in the Old City of Occupied Jerusalem.

The occupation cops claimed that they found two knives somewhere in the home.

The girl, reportedly in her 30s of age, was dragged to an Israeli detention center pending further interrogation.
10 Palestinians kidnapped by IOF from West Bank at crack of dawn

According to the Israeli 0404 news site, five Palestinians were kidnapped by the IOF from Bethlehem and Al-Khalil.

The campaign also targeted three Palestinians from Al-Khalil, including a Hamas affiliate.

The Palestinian anti-occupation protesters responded to the assault by hurling stones on the occupation troops.

The IOF further cordoned off residential neighborhoods in the nearby Al-Zababda and Mesaliya towns and pitched random checkpoints on the main access roads to the area, where Palestinian vehicles and civilians have been subjected to exhaustive inspection.
4 nov 2016
IOA releases astro-physicist Imad al-Barghouthi

Local sources affirmed that al-Barghouthi, from Ramallah, was released after spending six months in administrative detention according to which hundreds of Palestinians are held without charge or trial.

Al-Barghouthi was arrested by Israeli occupation forces on April 24, 2016 at Nabi Salah checkpoint.

He was previously detained in 2014 while on his way to the United Arab Emirates to participate in an international conference.

He was then released after two weeks.
IOF arrests 3 Palestinians south of West Bank

Israeli 0404 Hebrew website affirmed that three Palestinians were detained for being “wanted” to Israeli Shin Bet.

One of the detained youths is affiliated with Hamas Movement, the website claimed.

According to the sources, al-Sayeh’s health condition is stable after the surgery.

Al-Sayeh has undergone the surgery after several appeals were voiced to save his life due to his difficult health situation, the PPS pointed out.

Several medical tests were conducted prior the surgery according to international medical standards, the PPS stressed.

Al-Sayeh, 43, suffers from both cancer and heart disease. He recently became unable to walk.

The Palestinian sick prisoner was arrested in October 2015 and is currently held in Ramla prison hospital.

Three Palestinian detainees in Israeli jails suspended their hunger strike on Thursday following a decision not to renew their administrative internment.

A meeting held between the hunger strikers and Israeli intelligence officers, in coordination with the prisoners’ spokesperson in Negev jail, Bassel Al-Bazara, culminated in a decision not to renew the detainees’ administrative sentence.

The Israeli prison authorities vowed to release the detainees right after the end of their administrative term.

“This is a new victory achieved by Palestinian detainees in their fight for freedom and struggle against the administrative detention policy,” said Qaraqe. “The cause requires mass support and international backing to be brought to a halt.”

The Israeli Occupation Forces (IOF) arrested Thursday evening a Palestinian prisoner’s wife from her house in al-Khalil to the south of the West Bank.

The Palestinian Prisoners Society (PPS) affirmed that Arwa Sultan was arrested only ten days after her husband Jad Sultan’s detention.

Arwa is a mother of six children, the sources pointed out.
Israeli Soldiers Kidnap Two Palestinians In Hebron 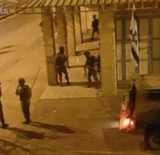 The Hebron office of the Palestinian Prisoners Society (PPS) said the soldiers invaded Wad as-Somman area, in Hebron city, and kidnapped a young man identified as Hamdi Adnan Abu Turki, before taking him to an unknown destination.

The PPS added that the soldiers also invaded the al-‘Arroub refugee camp, north of Hebron, and kidnapped Dia’ Jabr at-Teety, 33.

The soldiers also confiscated the car of at-Teety’s father after searching it and their home.

In the Gaza Strip, the soldiers, stationed on military towers across the border fence, fired several live rounds at farmers in their lands, east of the Zeitoun neighborhood, in Gaza city.
Page:  4 - 3 - 2 - 1
Powered by