According to a PIC reporter, Israeli forces were deployed in large numbers near the town and carried out combing operations after Israeli settlers claimed that a local-made bomb was thrown near their vehicles in the area.

No injuries were reported during the alleged attack.

Different neighborhoods were stormed and searched in Dohat town and Dheisheh refugee camp south of Bethlehem amid heavy fire of teargas bombs and rubber bullets which led to the outbreak of violent clashes.

At least one young man was arrested during the raids while two others were summoned for investigation.
Hunger striker’s family warns of his sudden death

The hunger striker Anas Shedid’s family warned of their son’s sudden death due to his serious health deterioration in Assaf Harofeh Medical Center.

The family quoted Israeli doctors as warning that Anas Shedid may die at any moment due to his sharp health deterioration as he continued his hunger strike for 50 consecutive days.

Shedid started suffered unbearable pains all over his body as he stopped taking vitamins, his brother affirmed.

Shedid is determined to continue his hunger strike till the end of his administrative detention and his immediate and unconditional release.

Prisoner Shedid has reportedly lost his ability to walk, move, and speak. He also suffers from chronic headaches, stomachaches, dizziness, asthma, and cardiomyopathy.

Born on June 7, 1997, prisoner Shedid was kidnapped by the Israeli occupation forces on August 2, 2016 and transferred to administrative detention, with neither charge nor trial, which made him declare his hunger strike shortly afterwards.
Israeli Soldiers Abduct Two Children, A Young Man, In Jerusalem 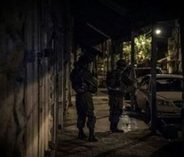 The soldiers searched homes during the invasion, and interrogated many Palestinians, before abducting a young man, identified as Hamza Hamada Taha, and two children, identified as Yazan Mohammad Harafsha, 14, and his brother Ayham, 13.

The three Palestinians were handcuffed and blindfolded, before the soldiers took them to an unknown destination.

The Palestinian Prisoners Society (PPS) has reported that Israeli soldiers have abducted, overnight and earlier Monday, at least ten Palestinians, including a child, in different parts of the occupied West Bank, and injured five Palestinians near Jericho, including one who suffered serious wounds.

The Hebron office of the PPS, in the southern part of the West Bank, said the soldiers invaded and searched many homes in the Hebron district, including the city itself, and abducted seven Palestinians.

In Bethlehem, the soldiers abducted a child, identified as Mohammad Ibrahim Abu Yabes, 15, and summoned two others from Doha town, west of Bethlehem, for interrogation.

In Tulkarem, in the northern part of the West Bank, the soldiers abducted a man, identified as Hussein Nawwaf Jallad, 40.

In Nablus, also in the northern part of the occupied West Bank, media sources have reported that clashes took place between dozens of soldiers and local youths, after the army invaded the city, and stormed dorms for female students.

Furthermore, the soldiers invaded al-‘Oja village, northeast of Jericho, and clashes with local youths, who hurled stones and empty bottles at the military jeeps, while the soldiers fired live rounds, gas bombs and rubber-coated steel bullets.

Medical sources said five Palestinians were injured, including one who suffered serious wounds before he was moved to a local hospital.

Army Abducts A Child Near Bethlehem

The PPS stated that the soldiers searched a number of homes in Husan, interrogated several Palestinians, and abducted a child, identified as Mohammad Ibrahim Abu Yabes, 15.

It added that the soldiers invaded and searched homes in Doha town, west of Bethlehem, and summoned Qussai Khaled Abu Salem, 21, and Omar Ata Mahmoud, 18, for interrogation at the Etzion military base and security center, after invading their homes and searching them.

In addition, the soldiers invaded al-Bayyada area and downtown area in Beit Ummar town, north of Hebron, also searched and ransacked homes, and stores, and kidnapped a former political prisoner, identified as Mohammad Mahmoud Awad, 31. The PPS stated that Awad suffers from a physical disability.

The PPS stated that the soldiers stormed a number of stores, especially used clothes stores, owned by a Palestinian identified as Kamal Razeq ‘Aaydi.
Furthermore, the soldiers installed a roadblock near the al-‘Arroub refugee camp, north of Hebron, and kidnapped a former political prisoner, identified as Nadim Ibrahim Sabarna, 35.

The soldiers also invaded Sa’ir town, northeast of Hebron, and summoned a former political prisoner, identified as Mojahed Nimir Froukh, for interrogation at the Etzion military base and security center.

In related news, the soldiers closed the main road leading to Beit ‘Einoun area, northwest of Hebron, and prevented the residents from crossing.

The soldiers installed many roadblocks in various neighborhoods in Hebron city, the main roads leading to Sa’ir and Halhoul town, Hebron’s northern entrance and the al-Fawwar junction.
IOA to acquit journalist Maali on conditions of deactivating Facebook

The Israeli occupation authorities decided to acquit journalist Khaled Maali on conditions that he close his Facebook account and pay a steep fine.

Speaking with PIC, local sources said an Israeli occupation court decided to release 48-year-old researcher Khaled Maali, from Salfit, on conditions that he deactivate his account on social network Facebook, shell out a bail of up to 7,000 shekels, and hand over his laptop.

On November 3, the Israeli occupation forces broke into Maali’s family home and wreaked havoc on the building before they arrested him.

The Israeli occupation authorities (IOA) on Sunday banned two Palestinian children from visiting their father in the Israeli Rimon jail.

A PIC news correspondent said the IOA banned eight-year-old Yamen and six-year-old Mohamed from visiting their father, Wael al-Arja, in the Rimon lock-up.

The Israeli occupation army prevented the children from passing through al-Dhahriya checkpoint, in southern al-Khalil, to reach out to their father, whom they said they missed a lot.

Both Yamen and Mohamed have not had contact with their father for the fifth month running due to an Israeli visit-ban.

According to the Palestinian Prisoner Society (PPS), Israeli jailers claimed there was no ambulance to transport Zaidat from the infirmary of the Ramla prison to Ofer court.

The PPS lawyer, who defends the child, said the boy was supposed to attend the court hearing held for him personally, adding that he filed an appeal to the court against the Israeli decision to extend the detention of Zaidat until the end of legal procedures.

Zaidat was detained last September after Israeli soldiers shot him in the leg and back, and moved at the time to Shaare Zedek Hospital, where he underwent a transplant platinum operation in the foot, then stayed for three weeks in the hospital, and later transferred to the Ramla prison infirmary.
Two teens arrested following clashes with soldiers near al-Khalil

The Israeli occupation forces arrested two teenagers from Sa’ir town in al-Khalil following violent clashes on Sunday evening with young men in a nearby area.

Local sources told the Palestinian Information Center (PIC) that the skirmishes between local young men and Israeli soldiers started after the latter set up a makeshift checkpoint at the entrance to Sa’ir town and embarked on searching passing vehicles and passengers.

They added that the young men hurled stones at the soldiers, who responded by intensively firing tear gas grenades.

Afterwards, a group of soldiers chased the young men into al-Dawara neighborhood of the town and captured two teenagers.
13 nov 2016
Sheikh Salah on hunger strike to protest isolation in Israeli jail

Sheikh Raed Salah, leader of the Islamic movement in 1948 occupied Palestine, announced, on Sunday, that he is starting a hunger strike in an Israeli jail.

Lawyer Mohamed Ighbariyeh said Sheikh Salah updated him on his decision to go on an open-ended hunger strike in protest at being mistreated and locked up in an isolated cell in the Israeli Rimon jail.

Head of the prisoners’ committee in the Joint Arab List, MK Osama Saadi, denounced the Israeli crackdowns against Sheikh Salah both inside and outside prison.

“Such oppressive measures against Sheikh Salah while he is behind prison bars are just unacceptable,” said Saadi.

He spoke out against Israeli visit-bans slapped against Sheikh Salah.

Saadi expressed his solidarity with Sheikh Salah, saying his hunger strike is legitimate.

He added that Israel’s prosecution of Sheikh Salah has nothing to do with truth and justice and is rather an embodiment of an Israeli preplanned policy against Palestinian leaders and activists in 1948 occupied Palestine.

He urged the Israeli occupation to immediately cease persecution and mistreatment of Sheikh Salah, who has always raised his voice to defend the holy al-Aqsa Mosque and the Palestinian people.

Sheikh Salah was kidnapped by the Israeli occupation forces on May 8 after an Israeli occupation court sentenced him to nine months in jail on allegations of incitement to anti-occupation protests in a Friday sermon known as Wadi al-Jouz sermon that dates back to 2007.

Last October an Israeli court turned down a petition lodged by the Mezan Center for Human Rights to end Salah’s isolation. 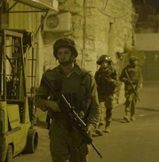 The Palestinian Prisoners Society (PPS) has reported that Israeli soldiers kidnapped, on Sunday at dawn, at least ten Palestinians, including six children, in different parts of the occupied West Bank, including in occupied East Jerusalem.

The soldiers also summoned five Palestinians from the refugee camp, and one from Beit Fajjar, south of Bethlehem, for interrogation at the Etzion military base and security center.

In Jerusalem, the soldiers invaded and searched many homes, and kidnapped Zayed Edkeidik, his son Ahmad, 13, and four siblings, identified as Ayham, 13, Omar, 14, and Ahmad Za’anin, 16, and Bahjat ar-Razem, 13.

The PPS said the soldiers have kidnapped 16 Palestinians, including a young woman, from Jerusalem, over the last two days.
Army Kidnap A Palestinian Teen In Ramallah

Several Israeli military vehicles invaded, on Sunday at dawn, the town of Silwad, east of the central West Bank city of Ramallah, searched homes and kidnapped a Palestinian teen.

The Palestinian Prisoners Society (PPS) said the soldiers searched and ransacked a number of homes, and kidnapped Ahmad Mohammad Hamed, 16.

The soldiers interrogated Hamed at his home prior to abducting him, while holding his family in another room, and took him to an unknown destination.
Angry protest in Qabatiya following arrest of young man

Local sources told the Palestinian Information Center (PIC) that furious young men blocked the entrance to the town near Muthalath al-Shuhadaa area with burning tires and rocks in protest at the arrest of their friend.

The sources added that some armed young men positioned themselves in the central district of the town and al-Khila area, and opened fire in the air.
Four W. Bank citizens kidnapped in dawn IOF campaigns

An Israeli army communiqué described the detainees as wanted, claiming that two of them are affiliated with the Popular Front for the Liberation of Palestine.

Quds Press, for its part, said the IOF raided several towns and villages in the West Bank and patrolled their neighborhoods at night.

It added that Israeli soldiers handed young men summonses for interrogation from the Shin Bet after raiding their homes in Beit Fajjar town in Bethlehem.

Ex-detainee Bassam Hammad, the father of martyr Anas Hammad, also received a similar summons during an IOF campaign in Silwad town near Ramallah.