The PPS lawyer Mufid al-Hajj affirmed that the court’s verdict was adjourned after he submitted an appeal against the Israeli prosecutor's demand to impose a 15-year jail sentence on Nurhan.

Nurhan was arrested in November 2015 after being shot and injured by Israeli soldiers for allegedly trying to carry out a stabbing attack in occupied Jerusalem along with her cousin Hadeel Awad who was killed during the incident.
Israel issues new administrative detention orders

Administrative detention is the imprisonment of Palestinians without charge or trial and on the basis of secret evidence for up to six month periods, indefinitely renewable by Israeli military courts.

Palestinian detainees have continuously resorted to open-ended hunger strikes as a way to protest their administrative detention and to demand an end to this policy, which violates international law.
Palestinian MP released from Israeli jails

Hamas’s affiliated parliamentary bloc, the Change and Reform bloc, affirmed in a brief statement that MP Fuqaha was released after spending six months in administrative detention.

Fuqaha was arrested last May from his house in Ramallah after being severely beaten by Israeli forces.

He spent more than six years in Israeli jails in separate arrests, most of them were carried out after he was elected as a member of the Palestinian Legislative Council in 2006.
PPS: “Israeli Soldiers Abduct Nine Palestinians In The West Bank”

Updated – 11:44 AM: The soldiers invaded Nablus, in the northern part of the West Bank, and kidnapped two Palestinians, identified as Ma’an Emad Abu Tammoun, 25, and Jawad Mohammad Hajj Mohammad, 35.

The Palestinian Prisoners Society (PPS) has reported that the soldiers invaded homes in the al-‘Arroub refugee camp, north of Hebron, in the southern part of the West Bank, kidnapped two Palestinians, identified as Ibrahim Atallah Jawabra, 25, and Jamal Abu Warda, 22, and confiscated surveillance tapes and equipment.

In Bethlehem, the soldiers searched a number of homes, and kidnapped Wa’el Abu Sbeih, 18, and Mohammad Issa Hmeid, 18.

In Jerusalem, the soldiers also searched homes and kidnapped a child, identified as Ahmad Morrar, 12, in addition to Abdul-Rahim Barbar.

Furthermore, the soldiers Zabbouba village, west of Jenin, in the northern part of the occupied West Bank, and the al-Far’a refugee camp, south of Tubas, in northeastern West Bank, and abducted one Palestinian, identified as Raed Ahmad Sobeh, 45
Israeli Army Invades Jenin, Abducts One Palestinian Near Tubas

Israeli soldiers invaded, on Wednesday at dawn, Zabbouba village, west of Jenin, in the northern part of the occupied West Bank, and the al-Far’a refugee camp, south of Tubas, in northeastern West Bank, and abducted one Palestinian.

The soldiers also searched at least five other homes, and interrogated many Palestinians while inspecting their ID cards.

The soldiers stormed and searched many homes, and confiscated surveillance tapes from the invading properties, in addition to interrogating many Palestinians.

It added that clashes took place in the refugee camp, after the soldiers invaded it, and that the soldiers fired live rounds, gas bombs and concussion grenades at youngsters who hurled stones on the military vehicles. 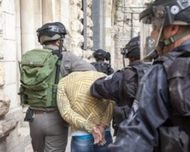 Israeli soldiers invaded, on Tuesday evening, Ras al-‘Amoud neighborhood, in Silwan town, south of the Al-Aqsa Mosque in occupied Jerusalem and kidnapped a young Palestinian man. The army also invaded Hizma and al-‘Eesawiyya towns, in Jerusalem, and clashed with dozens of youngsters.

In addition, the soldiers invaded Hizma town, northeast of Jerusalem, and clashed with dozens of local youths, who hurled stones and empty bottles on the invading army vehicles, while the soldiers fired gas bombs and rubber-coated steel bullets.

Israeli navy ships attacked, on Tuesday evening, Palestinian fishing boats near the shore in the Sudaniyya Sea, in Gaza, and abducted two fishers.

The WAFA Palestinian News agency has reported that the navy attacks the fishing boats in the Sudaniyya Sea area, near Gaza city, while they were sailing less than four nautical miles from the shore.

It added that the navy used water cannons against the fishing boats, before abducting two fishers identified as As’ad Omar and Ammar Sultan, in addition to confiscating their boats, and took them to the Ashdod Port.

The attack is part of daily violations against the fishers in Palestinian territorial waters, in addition to assaults targeting farmers and workers in Palestinian lands, in areas close to the border fence, in the besieged coastal region.

Abdul Fatah, a resident of Aqrba town west of Jenin, was sentenced to 17 years in prison, Israeli media sources reported.

He was convicted of carrying out a stabbing attack in Afula city within the Green Line on Oct.8, 2015, after allegedly entering Israel without permit.

An Israeli soldier was allegedly injured during the attack and taken to hospital for treatment.
Gazan trader arrested at Erez crossing

Nearly 20 Palestinian traders were arrested at Erez crossing since the beginning of 2016 under different pretexts.
IOF carries out pre-dawn raids, arrests in W.B.

The Israeli Occupation Forces (IOF) carried out overnight and at dawn Tuesday a large-scale raid and arrest campaign throughout occupied West Bank.

At least 13 Palestinians were detained during the campaign while several homes were stormed and searched.

A young man was arrested after Israeli forces violently broke into Asker refugee camp east of Nablus amid heavy fire of teargas bombs and live ammunition which led to the outbreak of violent clashes.

His family members were detained for several hours during the raid, while his father suffered teargas suffocation problem.

A big mess was left in the house after Israeli soldiers’ withdrawal.

On the other hand, Israeli forces arrested a Palestinian child near the Ibrahimi Mosque for allegedly possessing a knife.

The child was then transferred to Ofer military center for investigation.

In Jenin, clashes broke out in Anin and Zabouba towns after Israeli forces stormed the two towns amid heavy use of teargas bombs.

Several injuries were reported during the clashes.

Similar raids were carried out in Beit Ummar town in al-Khalil where several homes were stormed and a number of local youths were summoned for investigation including an-detainee.

A young man was also detained during the raid.
Alarm sounded over health of Jordanian hunger striker Mer’I

Alarm bells have been sounded over the sharp deterioration rocking the health status of hunger striker Shaheen Mer’I, the brother of Jordanian prisoner Muneer Mer’I held in an Israeli jail.

Shaheen has been on an open-ended hunger strike for the 6th day running outside the headquarters of the Jordanian Foreign Ministry to protest the apathy maintained by official authorities as regards his brother’s incarceration in an Israeli prison.

Shaheen took the decision to pressurize the Jordanian Foreign Ministry and authorities to take urgent action and follow up on his brother’s case.

Human rights sources said hunger striker Shaheen has lost weight and has been through balance disorders.

Detainee Muneer Mer’I has been held in the Israeli Gilboa lock-up, where he has frequently fallen in faints.

The Jordanian national called on the Jordanian authorities to assume their duties as regards his case and to allow his family to visit him in jail.

Over the past 14 years, the prisoner has not had contact with his family members, except for once in 2007.

The Israeli occupation army on Monday morning arrested four Palestinian customs officers as they were working on thwarting a smuggling attempt in al-Khalil (Hebron).

A spokesman for the Palestinian Authority customs authority said the four officers were doing their job and trying to prevent a cargo of contraband, which came from Israel, from going to Bani Naim town, east of al-Khalil.

The Israeli military court in Ofer on Monday postponed its decision to release 15-year-old Anas Zaid on bail, pending an appeal from the Israeli prosecutor.

The Israeli judge ordered the family of Zaid to pay 6,000 shekels as bail for his release, but he suspended the verdict for 20 hours until the prosecutor could file an appeal, according to lawyer Munder Abu Ahmed, who was hired by the Palestinian Prisoner Society to defend the boy.