The Israeli Occupation Forces (IOF) closed Saturday night all the entrance to Azzun town east of Qalqilia and carried out combing operations amid heavy fire of teargas bombs.

The sources pointed out that Israeli forces deployed in large numbers across the apartheid wall in the area.

Two youths were brutally attacked before being detained at the entrance to the town.
Solidarity events in Gaza, al-Khalil calling for 2 prisoners’ release

Dozens of Palestinian journalists protested, Saturday morning, outside the Red Cross office in Gaza city against the Israeli continued arrest of the journalist Bassem Sayeh despite his health deterioration.

The protesters urged the Palestinian Authority, Reporters without Borders, and the Federation of Arab Journalists to work together for the release of Bassem Sayeh and all the detained journalists in Israeli jails.

Meanwhile, a solidarity sit-in was organized in Yatta town south of al-Khalil calling for the release of the sick prisoner Youssef al-Nawaaja from Israeli jails.

Dozens of prisoners’ families, ex-prisoners, and representatives of the PA Prisoners’ affairs committee and the Palestinian Prisoners Society have participated in the event.

The participants held photos of the sick prisoners in Israeli jails, calling for their immediate release.

The Israeli occupation police on Friday prevented Palestinian volunteers from carrying out restoration work at the cemetery of Ramiya village in the Galilee.

Local sources reported that a team of volunteers were embarking on renewing the graves when policemen showed up and ordered them to stop and leave.

They added that the police force arrested one of the participants in the voluntary work.

Ramiya was home to a population of 1000, with its territory stretching 98 acres, but today, about 150 persons remain on land stretching only 10 acres.

The rest was appropriated during the biggest Israeli land grab in 1976. Even the area on which 45 families remain to this day is classified as Jewish National Fund property.

The village is not recognized and still without connection to any electricity or water grids.
30 Palestinian prisoners suffer chronic diseases

During a solidarity event in Qalqilia, Qaraqe said that Israeli Prison Service (IPS) is practicing “slow death policy” to do away with prisoners.

“Israeli prisons have become the source of epidemic, death, and dissemination of diseases in the bodies of the prisoners,” he underlined.

Qaraqe stressed the urgent need for an immediate international intervention to put an end to IPS’ unhuman crimes against Palestinian prisoners.

On the other hand, Qaraqe pointed out that four Palestinian prisoners continued their hunger strike in protest against their administrative detention.

All the four hunger strikers were sent to solitary confinement in an effort to exert pressure on the detainees to end their strikes, he added.

The Israeli Prison Service (IPS) continued to isolate the prisoner Abdu Allah Abu Daher, 25, for more than a year over an altercation with an Israeli officer.

A local rights group revealed that Abu Daher was transferred to Eshel’s solitary confinement in September 2015 over an altercation with an Israeli officer following the death of the prisoner Yasser Hamdouni in Israeli jails.

A number of other punitive measures were also imposed on Abu Daher at that time including denying family visits for two months, prohibiting him from using his electrical equipment or the canteen for two months as well, in addition to imposing a fine of 450 shekels.

The isolated prisoner Abu Daher, from Gaza Strip, was arrested in 2012 and sentenced to 12 years imprisonment.
Two kidnapped, others summoned by IOF in al-Khalil

The Israeli occupation forces (IOF) at dawn Saturday kidnapped two Palestinian citizens and summoned three others during raids on homes in different areas of al-Khalil.

Local sources told the Palestinian Information Center (PIC) that soldiers broke into and ransacked the house of Jadallah Sultan in al-Jeldah area of al-Khali.

They added the soldiers rounded up Sultan and took him handcuffed to an undeclared place.

Another citizen was kidnapped during an IOF campaign in Bani Na'im.

Local sources said that soldiers stormed the house of Mohamed Shu’aib, confiscated his motorbike and arrested him.

The Palestinian Detainees’ Committee has reported, on Saturday afternoon, that Israeli soldiers of the Masada special unit, of the Israel’s Prison Service, invaded Section 3 of Galboa’ prison, and assaulted many detainees, an issue that pushed them to declare a hunger strike.

The head of the Detainees’ Committee Issa Qaraqe said the soldiers assaulted several detainees, and searched all rooms, adding that 120 Palestinians are held in this section alone.

Qaraqe’ added that the invasion was sudden, without any provocation from the detainees, an issue that created tension, especially after the soldiers forced a detainee, identified as Mohammad ‘Arman, in solitary confinement.

The detainees then decided to launch a hunger strike to protest the invasion, the assaults and ongoing violations.
Army Kidnaps A Palestinian In Hebron

The Hebron office of the Palestinian Prisoners Society (PPS) has reported that Israeli soldiers kidnapped, Saturday, a Palestinian man in Hebron city, in the northern part of the occupied West Bank.

The PPS said the kidnapped resident has been identified as Jad Ghaleb Tamimi, 38, after breaking into his home, in the al-Jedla area in Hebron city, and violently searching it.

The soldiers also invaded several neighborhoods in Hebron city, and installed roadblocks in Joret Bahlas area, in its northern part, and the al-Harayeq area, south of the city.

The soldiers stopped and searched dozens of cars, and interrogated the Palestinians while inspecting their ID cards.
Soldiers Kidnap Bus Driver Transporting Elders For Refusing To Order Them Out

Israeli soldiers stationed at Beit Iksa military roadblock, northwest of occupied East Jerusalem, kidnapped Saturday a bus driver transporting elderly Palestinians, after refusing to force them out of his bus to be inspected by the army.

The head of Beit Iksa village council, north of occupied East Jerusalem, Sa’ada Khatib, stated that the soldiers stopped the bus while transporting elderly Palestinians, and ordered the driver to force the seniors out of his vehicle, to be searched and inspected, but he refused.

Khatib stated that the driver did not want to inflict any suffering on the elders by ordering them out of the bus, then back in, and challenged the soldiers who demanded such an act.

He called on international human rights groups to monitor the Israeli military roadblocks, to document these ongoing violations, and to work on ending them, adding that Beit Iksa has been subject to frequent invasions and violations, in addition to severe restrictions at its roadblock.

“This is completely illegal and inhumane,” Khatib said, “It is unacceptable that a bunch of young soldiers continue to punish an entire village, and deny the Palestinians their basic right of the freedom of movement.”

It is worth mentioning that Israel completed the isolation of Beit Iksa in 2006, after the Annexation Wall fully encircled it, making residents unable to enter or leave it without crossing through the roadblock.
Four Hunger Striking Detainees Remain In Solitary Confinement 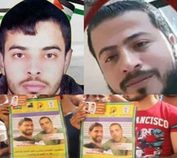 The Palestinian Detainees’ Committee has reported that four detainees, held by Israel under arbitrary Administrative Detention orders without charges or trial, remain in solitary confinement since they declared their strikes.

The Committee stated that Anas Shadeed and Ahmad Abu Fara, both from the southern West Bank city of Hebron, are held in solitary confinement cells in Ramla prison since their started their strike on September 25, 2016.

It added that Hasan Rabay’a and Majd Abu Shammala, from the northern West Bank district of Jenin, started their strikes on October 4, 2016, and are held in solitary confinement at the Negev Detention camp.

The striking detainees are facing very difficult conditions, and are completely isolated from other detainees, and the rest of the world.

They are suffering pain in most parts of their bodies, are unable to sit or stand, and are still refusing to take any forms of medications or vitamins.

The committee said that Anas Shadeed and Ahmad Abu Fara are refusing to be examined by Israeli prison doctors, and demanding to be hospitalized.

The head of the Palestinian Detainees Committee Issa Qaraqe held Israel fully responsible for the lives of the striking detainees in particular, and all detainees in general.

Qaraqe’ demanded moving the striking detainees to hospitals instead of forcing them in solitary confinement as this measure poses further risks and complications.

He added that the Israeli Authorities deliberately violate the basic right of the striking detainees, especially by holding them under inhumane conditions in solitary confinement, and completely isolate them.
Israeli authorities suspend school principal in J’lem for two weeks

The Israeli ministry of education has suspended the principal of al-Issawiya Junior High School in Occupied Jerusalem after the soccer team which he coaches carried a banner mourning the death of martyr Misbah Abu Subaih during a recent match.

According to the student committee of parents in Issawiya, the Israeli education ministry summoned Khader Obaid, the school principal, to question him over the match that was held recently at Faisal Husseini Stadium, north of Jerusalem and informed him of its decision to suspend him for two weeks.

The Israeli decision was taken as a punitive measure against Obaid after he and his team players and members had paused for a picture during a local match as they were holding a placard reading “Hilal al-Quds club mourns the death of al-Aqsa Lion and the brave martyr, Misbah Abu Subaih (Abul-Izz).”

Martyr Abu Subaih carried out a shooting attack aboard a vehicle on October 9 in east Jerusalem, wounding six Israeli settlers and killing two others.