Israeli forces detained at least 17 Palestinians, including two young children, during overnight raids across the occupied Palestinian territory, also raiding the home of a sick prisoner and threatening his family, locals said.

Israeli forces detained two 8-year-old children near the illegal Israeli settlement of Migdal Oz in the occupied West Bank district of Bethlehem on Wednesday evening, claiming that they were trying to carry out a stabbing attack.

An Israeli army spokesperson told Ma’an that two Palestinian children under the age of ten were detained near Migdal Oz, and that knives were found in their possession.

She added that the two children, who were reportedly from the village of Beit Fajjar, said during interrogations that they had been sent by someone to carry out a stabbing attack.

She did not have further information on whether the children were still detained as of Thursday evening, nor whether their parents had been contacted.

The army spokesperson told Ma’an that one person had been detained in Bethlehem, likely referring to Abu Salem.

In the southern West Bank district of Hebron, locals told Ma’an that Ayman Taha was detained in Hebron city, while Rami Muhammad Jaber al-Rujoub was detained in the village of Dura.

Meanwhile, Yassir Allan was reportedly detained in Shufat in the Jerusalem district of the West Bank.

In the central West Bank district of Ramallah, the army spokesperson said that one Palestinian was detained in the village of Kharbatha al-Misbah.

Locals added that Israeli soldiers stole money while searching the houses, and that clashes broke out between Palestinian youth and Israeli forces, without causing injuries.

Israeli forces also raided the home of sick prisoner Mutawwakil Radwan overnight, and threatened his access to medical care if his relatives kept advocating for his release.

Radwan, who is serving a 22-year-sentence, is currently at the al-Ramla Hospital in a fragile health condition as he suffers from cancerous tumors and heart disease.

Several events have been carried out in solidarity with Radwan in Qalqiliya recently demanding his release.

An Israeli intelligence officer informed Radwan’s relatives that the prisoner was being treated at one of the best Israeli hospitals, and warned them against any increase in popular support for Radwan.

In the northern West Bank, locals reported that Israeli forces detained Anwar al-Sakhil in the city of Nablus, as well as Shadi Talal Zakarna in the Jenin-district village of Qabatiya.

The army spokesperson confirmed one detention in Qabatiya, but said that two Palestinians, one of whom was an alleged Hamas operative, were detained in Nablus.

She added that another Palestinian was detained in the Salfit-district village of Bani Hassan.

Israeli forces carry out detention raids in Palestinian communities on a near-nightly basis, with the UN documenting 178 such raids from Oct.4 to Oct. 17.

According to prisoners rights group Addameer, 7,000 Palestinians were detained by Israel as of August.
Jerusalemite woman’s detention extended for fifth time

The Israeli Magistrate Court extended the detention of the Jerusalemite woman Ghadir Jamjoum till next Friday for the fifth consecutive time.

The court also decided to continue banning her lawyer visits.

Jamjoum, a mother of four children, was arrested from her house in al-Ram town north of occupied Jerusalem on Oct. 12.
PPS: “Israeli Army Kidnaps 28 Palestinians, Including Children, In The West Bank” 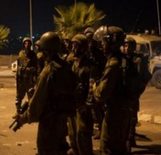 The Palestinian Prisoners Society (PPS) has reported that Israeli soldiers kidnapped, overnight and at dawn, twenty-eight Palestinians, including children, in different parts of the occupied West Bank. The Bethlehem office of the PPS said the soldiers kidnapped eleven Palestinians in the district, mainly from al-Khader town, south of Bethlehem.

In Ramallah district, the soldiers invaded and searched many homes and the district, and kidnapped Mohammad Abbassi, 16, Yousef Ahmad Hashem, 15, Mohammad Omar Hussein, 28, and Ala Sobhi Hammouda.

In Nablus, in the northern part of the West Bank, the soldiers kidnapped Abdul-Rahma Waleed Saleh, 20, and Anwar Sa’ad Sakha, 25.

Several military vehicles invaded the al-Wad area, in Jerusalem’s Old city, and kidnapped a young man, identified as Abada Najeeb, and a child identified as Adham Za’tary, before taking them to an interrogation center.

The soldiers also invaded the al-Eesawiyya town, in the center of Jerusalem, and kidnapped a young man, identified as Dia’ Ayman ‘Obeid.

The invasion into al-Eesawiyya was the second since Wednesday evening, when the soldiers stormed the tow and clashed with many local youths.

In related news, the army released two detained siblings, identified as Omar and Ali al-Ferawi, from the African Neighborhood, adjacent to the Al-Aqsa Mosque, after imposing a 3000 Shekels fine on each of them.

The two siblings will have to go to the District Court, in West Jerusalem, in two weeks.
Israeli Soldiers Kidnap Seven Palestinians In Al-Khader, Occupy A Home

Israeli soldiers invaded, on Thursday morning, the town of al-Khader, south of Bethlehem in the occupied West Bank, and kidnapped seven Palestinians, including three siblings. The soldiers also occupied a home and used it as a make-shift interrogation center.

Ahmad Salah, the coordinator of the Popular Committee in al-Khader, said several army vehicles invaded the town, while many soldiers were stationed in the Bawwaba area, before stopping and searching many Palestinians, and examined their ID cards.

Later, the soldiers kidnapped three Palestinians in the same area; two of them have been identified as Emad Mohammad Salah, 42, and Osama Salaheddin Salah, 27.

In addition, the soldiers occupied a home in the al-Baloa area, and used it as an interrogation center for many youngsters who were detained by the army while walking in the town.

The soldiers were also extensively deployed in the area and questioned many Palestinians while inspecting their ID cards.
Army Kidnaps A Palestinian In Hebron, Navy Attacks Fishers In Gaza

Israeli soldiers invaded, on Thursday, the southern area of Hebron city, in the southern part of the occupied West Bank, and kidnapped one Palestinian. The soldiers also invaded an area east of Tubas, while the navy attacked fishing boats in Gaza waters.

The Hebron office of the Palestinian Prisoners Society (PPS) said the soldiers invaded homes in the southern area of the city and kidnapped Ayman Abdul-Hamid Taha, 33.

In addition, the soldiers invaded Khallet Hamad area, in the West Bank’s Northern Plains area, east of Tubas, and threatened to demolish newly constructed structures, even tents, installed in place of structures the military demolished more than a month ago.

In addition, Israeli navy ships fired many live rounds at Palestinians fishing boats, close to the coast in the northern part of the Gaza strip.
26 oct 2016
Israeli Police Detains 34 Palestinians In The Negev

The Israeli police conducted, Wednesday, a large-scale invasion into Houra and al-Leqia towns in the Negev, and detained 34 Palestinian workers, who did not obtain work and entry permits into Israel.

According to a statement by the Israeli Police, the 34 Palestinians, from different parts of the West Bank, were working in stores, including Barbour shops, car repair facilities and restaurants, and that they “illegally entered the country for work.”

Two Palestinians from the Negev were also detained for providing shelter and work to the workers from the occupied territories.

The police also claimed a woman from the Negev was detained and sent to an interrogation center after the officers found weapons wrapped in blankets in a stroller she was pushing.

It added that officers also located thousands of Shekels believed to have been smuggled and laundered.
Raids, demolition process, and arrests carried out in OJ

The Israeli police forces carried out since the early morning hours of Wednesday a large-scale raid and arrest campaign throughout occupied Jerusalem. At least seven apartments were also demolished in the city.

In the Old City, the so-called Israeli border guards stormed and violently searched a local home.

Two young men were summoned for investigation during the raid.

A young man was arrested from his house in Silwan town and taken for investigation for unknown reasons. A young woman was also detained near Bab al-Amoud area.

Similar stone-throwing attacks were allegedly reported in Silwan and the Old City, the sources added.

Along the same line, Israeli forces demolished seven Palestinian-owned apartments including four in Silwan town and three others in Beit Hanina under the pretext of being built without permit.

Tensions have been running high in the occupied Palestinian territories over the Israeli escalated violations in al-Aqsa Mosque.

257 Palestinians were killed by Israeli gunfire since the outbreak of the events in October 2015.
Israeli court sentences Jerusalemite to 17 years

The soldier was slightly injured during the attack.

A fine of 13,000 US dollars was also imposed on al-Maqdisi.
Israeli court decides not to renew 3 Palestinian prisoners' detention

The Israeli court has set a time limit for the prisoners’ administrative detention, the sources added.

The PPS said that Omar Barghouthi, 63, is expected to be released on Dec. 19, 2016 after being sentenced to two months in administrative detention. He had spent 26 years in Israeli jails in separate arrests.

The Israeli Occupation Forces (IOF) arrested at dawn Wednesday 14 Palestinians during a violent raid campaign throughout the West Bank.

An Israeli army statement said that 14 “wanted” Palestinians were detained Wednesday for being allegedly involved in anti-occupation attacks.

The arrests were mainly reported in Nablus and Ramallah, according to the sources.

Five arrests were reported in Nablus, while four Palestinians were detained in Ramallah including an activist in Hamas Movement.

Two young men were detained in Bethlehem while two other arrests were carried out in al-Khalil.

The PIC reporter affirmed that an ex-detainee was re-arrested after Israeli forces broke into his family house in Madama town, south of Nablus.

Four ex-detainees were detained over the past month from Nablus city.

In Tulkarem, Israeli forces stormed a local house and assaulted its owners before confiscating their vehicle.

Two ex-detainees were also arrested from their houses in southern Nablus.