The Israeli occupation police arrested on Sunday evening the coach of the Hilal al-Quds soccer team after he posed for a picture with the banner of a slain anti-occupation protester.

The coach was identified as 55-year-old Maher Abu Sneineh, a resident of Jerusalem’s Old City.

Palestinian soccer team players posed for a picture with a banner praising the Palestinian protester Musbeh Abu Sbeih, who was killed by the Israeli occupation army following an anti-occupation attack in Occupied Jerusalem last week.

Members of the West Bank Premier League team Hilal al-Quds smiled while holding a poster with Musbah’s image, which included the words: “The Hilal al-Quds soccer club mourns the loss of the lion of al-Aqsa, the martyr and hero Musbeh Abu Sbeih.”

Red Cross spokeswoman Suheer Zaqout said they have been informed about an Israeli decision banning dozens of Palestinian families from visiting their imprisoned relatives.

Earlier, on Saturday, the IOA closed off all the access roads and crossings into the West Bank and Gaza Strip to mark the so-called Sukkot holiday.
PPS: “Israeli Army Kidnaps Six Palestinians Near Nablus”

The Nablus office of the Palestinian Prisoners Society (PPS), in the northern part of the occupied West Bank, has reported that Israeli soldiers invaded Sebastia town, northwest of the city, and kidnapped six Palestinians. 22 Palestinians have been kidnapped at dawn in different parts of the West Bank.

The PPS said the soldiers surrounded the town before several military trucks, and jeeps invaded it.

The soldiers then initiated searches of a number of homes and kidnapped six Palestinians, after interrogating.

An Israeli judge of the Jerusalem District Court has decided to release Eman Abu Sbeih, the daughter of Misbah Abu Sbeih, who was killed by the army on October 9, 2016. The court forced the family to pay a 2500 Shekels fine, in addition to ordering Eman not to use social media pages, and to refrain from talking to journalists.

Lawyer Mohammad Mahmoud, said the District Court Judge has ordered Eman’s release, after imposing a 2500 Shekels fine, in addition to issuing a ruling preventing her from talking to media agencies and reporters, and preventing her from using all social media sites.

Eman was taken prisoner, last Monday at dawn, after the soldiers invaded her grandfather’s home, in the al-Ram town, north of Jerusalem.

Prior to her abduction, Eman published a video on Facebook praising her father, who was shot to death after carrying out a shooting attack near the Light-Rail stop, close to the Police headquarters, in Jerusalem.

After the shooting, the soldiers invaded Abu Sbeih’s home, and several homes belonging to his family, and violently searched them.

The soldiers then interrogated Abu Sbeih’s mother, and summoned his three brothers and three sons, for interrogation, in addition to threatening harsher measures should they fail to attend the secluded times of interrogation.

The army also shut down all stores, and warehouses, owned by the family, under direct orders from Roni Noma, the commander of the Israeli Army Depth Corps, who cited article 319 of the Israeli Emergency Law of 1948.
PPS: Israeli Soldiers Kidnap Eleven Palestinians In Jerusalem 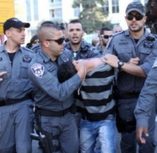 The Jerusalem office of the Palestinian President Society (PPS) has reported that the number of Palestinians, kidnapped by Israeli soldiers on Sunday at dawn, has arrived to eleven, including children.

The PPS said the army conducted extensive invasions into many homes in the Old City, Silwan and Abu Dis towns, and several others areas in the Jerusalem district, and kidnapped eleven Palestinians.

It identified the kidnapped Palestinians as:

Updated From: Israeli Army Kidnaps Eleven Palestinians In Jerusalem – Oct 16, 2016 @ 11:56
Israeli soldiers have kidnapped, on Sunday at dawn, seven Palestinians, including three children, in different parts of occupied East Jerusalem.
The Jerusalem office of the Palestinian Prisoners Society (PPS) has reported that the soldiers kidnapped Maher Abu Sneina, from his home in Jerusalem’s Old City.

The PPS added that the soldiers searched and ransacked Abu Sneina’s home before abducting him. Abu Sneina works as a guard of the Al-Aqsa Mosque.

Amjad Abu Assab, the head of the Jerusalem Committee for Families of Detainees, has reported that the soldiers violently searched several homes in Silwan town, and kidnapped five Palestinians, including three children.

All of the kidnapped Palestinians were moved to the Al-Qashla detention center, before being transferred to the al-Maskobiyya detention and interrogation center, west of Jerusalem.

On Saturday evening, the soldiers invaded a number of homes in Batn al-Hawa neighborhood in Silwan, and attacked several Palestinians in addition to searching homes and property.

During the invasion, a number of youngsters hurled Molotov cocktails at an illegal settlement outpost, while the soldiers fired dozens of concussion grenades at random.
Israeli Soldiers Kidnap Five Palestinians In Hebron

Israeli soldiers invaded, on Sunday at dawn, several Palestinian areas in the southern West Bank district of Hebron, broke into and searched many homes, and kidnapped five Palestinians. The soldiers also confiscated thousands of Shekels from a home in Sa’ir town.

Furthermore, the soldiers invaded the center of Hebron city, before breaking into “Infinity” Print Shop, owned by Nidal Omran al-Qawasmi, and confiscated its equipment and belongings, and also invaded Al-Arabi and Al-Qaisi print shops.

In Sa’ir town, the soldiers invaded and searched one home, and confiscated a large sum of cash, allegedly for being used to fund armed resistance groups.
In addition, the soldiers installed many roadblocks on several roads leading to villages, towns and refugee camps, in the Hebron district, before stopping and searching dozens of cars.

The additional roadblocks are part of the Israeli decision to place the West Bank and Gaza under a very strict siege during the Sukkot Jewish holiday.
14 oct 2016
IPS prevents prisoner Sayeh from cancer cure

Al-Sayeh’s wife, Mona Abu Bakr, also an ex-prisoner, said the Ramla prison clinic administration decided to prevent her jailed husband from treatment under the pretext that al-Sayeh will be undergoing a cardiac surgery.

Al-Sayeh was arrested by the Israeli occupation forces during a court hearing held for his wife at the Israeli Salem court on October 8, 2015.

He has been diagnosed with cancer and sharp cardiomyopathy, along with critical lung diseases and breathing disorders.

Human rights groups have often sounded the alarm over the preplanned medical neglect perpetrated by the Israeli prison authorities against al-Sayeh, among other Palestinian detainees, behind prison bars.
Israeli Soldiers Kidnap Five Palestinians in The West Bank

Israeli soldiers invaded, on Friday at dawn, several districts in the occupied West Bank, searched many homes and kidnapped at least four Palestinians, while one child was kidnapped, on Thursday at night, the Palestinian Prisoners Society (PPS) has reported. The soldiers also searched many young men, in the Al-Aqsa Mosque, in Jerusalem.

The PPS said that the soldiers invaded Nablus city, in the northern part of the occupied West Bank, before breaking into and searching many homes, and kidnapped at least two Palestinians, identified as Hamdi Khashan, and Ala’ Arafat.

In addition, the soldiers invaded Qabatia town, south of the northern West Bank city of Jenin, searched homes and kidnapped one Palestinian, identified as Ahmad Naji Abu Zalata, 33, after breaking into his home.

Clashes took place between the invading soldiers and dozens of local youths who hurled stones at the army, while the military fired several gas bombs, rubber-coated steel bullets, and live rounds.

Also in Jerusalem, the soldiers and police officers invaded the Al-Aqsa Mosque in Jerusalem, and searched many young men inside the holy sites, while inspecting their ID cards.

On Thursday at night, the soldiers kidnapped a child, identified as Mahdi Ishaq Sheikh, 15, after stopping him at a military roadblock near Kharbatha al-Misbah village, west of Ramallah, in central West Bank.

The army claimed that the soldiers searched the child, and discovered “he carried a concealed knife.”
13 oct 2016
Israeli police slaps bans from al-Aqsa on 8 Muslim youths

The Israeli occupation police on Thursday banned eight Muslim youngsters from the holy al-Aqsa Mosque, in Occupied Jerusalem, for 15 days.

Chairman of the committee of the prisoners’ families, Amjad Abu Asab, said the Israeli policemen kidnapped nine Palestinians from Jerusalem’s Old City and Silwan overnight and dragged them to Israeli detention centers.

Meanwhile, the ninth captive, identified as the brother of slain Ali Sheyoukhi, Muhammad, has been subjected to harsh psycho-physical torture at the Mascoubiya investigation center.

At least 26 Palestinians were banned from the al-Aqsa Mosque and the Old City, in Occupied Jerusalem, during October month.
Israeli police arrest girl for possessing knife in O. Jerusalem

The Israeli occupation police on Thursday arrested a Palestinian young woman at the entrance to Bab (gate of) Qattanin, claiming she was found in possession of a knife.

According to local sources, police personnel at the gate detained the girl after searching her bag and finding a knife inside it.

The girl, whose identity is still unknown, was taken to a police station in the Old City of Jerusalem.

In another incident, 66 Jewish settlers have reportedly desecrated the Aqsa Mosque’s courtyards under police protection in the morning, amid restrictions on the entry of Muslims to their holy site.
16 Palestinians kidnapped by IOF from occupied territories

A least 16 Palestinian were kidnapped by the Israeli occupation forces (IOF) from the West Bank and Jerusalem on the break of dawn Thursday.

The occupation army claimed responsibility for the abduction of nine Palestinians from the West Bank provinces of Ramallah, Bethlehem, and al-Khalil on allegations of involvement in anti-occupation activities.

The Israeli 0404 news site said a Palestinian citizen was kidnapped by the Israeli soldiers at Zaatara checkpoint, to the south of Nablus, for holding 100,000 shekels allegedly allocated to funding anti-occupation activities.

The sweep culminated in the abduction of six Palestinians from Occupied Jerusalem, including five from the Old City.

An Israeli army patrol and policemen stormed Silwan town and wreaked havoc on the family home of the slain Palestinian youth Ali al-Sheyoukhi, shot dead on Wednesday by the occupation troops, before they kidnapped his twin brother, Muhammad.
Army Kidnaps One Palestinian In Jerusalem

Israeli soldiers kidnapped, on Thursday at dawn, a young Palestinian man from Silwan town, in occupied East Jerusalem, and released five, who were previously detained, after issuing orders denying them access to the Al-Aqsa Mosque.

The soldiers invaded the family home of Mohammad Shiokhi, 20, searched the property and abducted him.

Mohammad is the twin brother of Ali Shiokhi, who was killed by the army on Tuesday evening, October 11, 2016.

The army also released five Palestinians from different parts of Jerusalem, after issuing orders denying them access to the Al-Aqsa Mosque, and its surrounding areas, for different periods.

In related news, an Israeli court in Jerusalem extended the remand of Ghadeer Jamjoum, and her nephew Mohammad al-Hashlamoun, until this coming Monday for further interrogation.

The two were kidnapped, Wednesday, from their homes in the ar-Ram town, north of Jerusalem.
Israeli Soldiers Kidnap Five Palestinians, Including Two Children, In Bethlehem

In addition, the soldiers invaded Beit Fajjar town, south of Bethlehem, before breaking into the homes of Ahmad Yousef Taqatqa, and Essam Thawabta, and violently searched them.

The soldiers also distributed leaflets threatened to impose further collective measures on the residents if they “hurl stones on settlers’ cars, or participate in protests.”
Page:  7 - 6 - 5 - 4 - 3 - 2 - 1
Powered by