The sources claimed that Palestinian youths carried out since morning hours 16 stone-throwing attacks against Israeli settlers.

Meanwhile, Israeli police arrested on Tuesday a 15-year-old Palestinian minor from al-Tur neighborhood in occupied Jerusalem for allegedly being involved in the stone-throwing attack.

The Israeli Occupation Forces (IOF) detained Tuesday afternoon 50 Palestinian students and their eight teachers at the entrance to Umm al-Raihan town, isolated behind the apartheid wall south of Jenin.

Local sources affirmed that the students were used to cross via an Israeli Iron Gate erected at the entrance to the town to reach their school.

However, the students and teachers were surprised today that Israeli forces closed the Iron Gate and left them behind the gate for more than two hours.

The Palestinian Prisoners Society (PPS) has reported that Israeli soldiers invaded, on Tuesday at dawn, the West Bank districts of Hebron, Bethlehem and Jenin, stormed and violently searched many homes, and kidnapped seven Palestinians.

The Hebron office of the PPS said the soldiers invaded many towns and communities, in the district, broke into and violently searched many homes, and kidnapped five Palestinians.

In addition, the soldiers invaded Bethlehem, and kidnapped one man, identified as Tamer Issa Salah, 27.

Another Palestinian, identified as Salah Fares Salah, 19, was kidnapped from his home in Jenin, in the northern part of the West Bank.
17 oct 2016
Israeli Army Kidnap 15 Palestinians, Including 10 Children, In Jerusalem, Three In Ramallah

The Palestinian Prisoners Society (PPS) has reported that Israeli soldiers have kidnapped, on Monday afternoon, 15 Palestinians, including 10 children from a school for orphans, and the schools headmaster, in occupied East Jerusalem. The soldiers also kidnapped three Palestinians in Ramallah.

Eyewitnesses said the soldiers chased many children while leaving a local school for orphans, and invaded its campus, in the Old City of Jerusalem, assaulted many of them and kidnapped ten.

The Israeli army claimed that some students hurled stones at their vehicles, and at soldiers stationed near the main gates of the Al-Aqsa Mosque.
The Wadi Hilweh Information Center in Silwan (Silwanic) said the kidnapped children have been identified as;

The school’s headmaster, who kidnapped from the school campus, has been identified as;

The soldiers also kidnapped four young men in Jerusalem’s Old City; they have been identified as;

Wadi al-Hilweh Information Center affirmed that ten students were detained after being chased for long hours in the Old City Monday morning.

The detained minors were taken for investigation for allegedly being involved in stone-throwing attack against Israeli settlers.

The Orphanage School was stormed twice over the past two weeks, during which its director and three students were detained.
Head of Jerusalem Education Administration arrested

Local sources affirmed that Israeli police forces broke into the School under the pretext of looking for a number of students allegedly involved in stone-throwing attack against Israeli settlers.

The Orphanage School was stormed twice over the past two weeks, during which its director and three students were detained.

Earlier Monday, five Palestinians were detained during an Israeli raid campaign in Bethlehem, al-Khalil, and Nablus.
Sick youth among 5 Palestinians kidnapped by IOF from West Bank

The Israeli occupation forces (IOF) at dawn Monday kidnapped five Palestinians, including an ex-prisoner and a sick youth, from the West Bank.

A PIC news correspondent said an Israeli army patrol rolled into Talfit town, to the southeast of Nablus, and kidnapped the Palestinian youngster Labeeb Jabr al-Haj Muhammad after they wreaked havoc on his family home.

The captive has reportedly been diagnosed with a critical kidney disease.

The IOF further stormed Orata town, in eastern Nablus, and kidnapped the Palestinian ex-prisoner Huzaa Asaad Louleh, 27, after they rummaged into his family home.

Louleh was released by the Israeli occupation authorities in April, after he had served a ten-month administrative prison-term in an Israeli lock-up.

The IOF further kidnapped a Palestinian youth from his own family home in the Aida refugee camp, in northern Bethlehem province.

The occupation troops also broke into al-Khalil’s northwestern town of Surif and kidnapped two Palestinian youngsters after they ravaged their family homes.

Meanwhile, a series of military checkpoints was pitched by the IOF on the entrances to Halhoul village, in northern al-Khalil, and Sa’ir, to the northeast.

The Israeli military forces further sealed off the northern entrance to al-Khalil city with a military checkpoint, where Palestinian vehicles and passengers have been subjected to exhaustive inspection.

Israeli Soldiers Kidnap Two Palestinians In Nablus, One In Bethlehem

The Bethlehem office of the Palestinian Prisoners Society (PPS) has reported that several army vehicles invaded Aida refugee camp, north of the city, and kidnapped one Palestinian.

It said the soldiers searched homes in the camp, and kidnapped Khalil Mousa Zreina.

It is worth mentioning that Hazza’ is a former political prisoner, who was held for 10 months.

It added that the soldiers ransacked the home of a young man, identified as Labeeb Jaber Mohammad, in Talfit village, and kidnapped him.
Army Kidnaps Two Palestinians Near Hebron 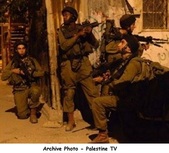 The Hebron office of the Palestinian Prisoners Society (PPS) has reported that the soldiers invaded a number of homes, and searched them, before kidnapping the two Palestinians.

The PPS added that the two kidnapped young men have been identified as Ibrahim Mustafa Eghneimat and Abdullah Mohammad Ateyya.

In related news, the soldiers invaded several neighborhoods in Hebron city, and installed roadblocks at the main entrances of Sa’ir and Halhoul towns, in addition to Jouret Bahlas area, north of Hebron.