The Palestine Center for Prisoners Studies pointed out that Baara was arrested in 2004 and sentenced to three life sentences plus 35 years for allegedly being affiliated with Fatah’s armed wing and involved in anti-occupation attacks.

Baara is one of the most difficult health conditions in Israeli jails as cancerous tumors had formed behind his ear.

He was held in Ramla prison hospital for long periods of time; however, his health situation has dramatically deteriorated over the past few years.

Baara’s family also called on international human rights institutions to save their son’s life before it is too late, holding the Israeli occupation authorities responsible for his safety.
Footage shows youth heavily beaten by IOF

19-year-old Haytham Abdul Nasser Seyaj was aggressively beaten by the Israeli occupation forces (IOF) prior to his abduction from his own family home in al-Khalil, a footage shows.

In a video circulated on social media networks, Israeli occupation soldiers appear aggressively beating 19-year-old Seyaj outside of his family home while his parents and relatives kept crying for help.

Seyaj was held in the Palestinian Authority (PA) jails last March after he allegedly attempted to carry out an anti-occupation stabbing attack in an Israeli illegal settlement in Ramallah.

Seyaj started an open-ended hunger strike in the PA Beitouna lock-up in protest at his arbitrary detention.

Seyaj’s story is a remainder of the abduction of the Wael Al-Beitar anti-occupation cell, whose members have been the permanent targets of severe crackdowns by the IOF and the PA.
Israeli Soldiers Kidnap Three Palestinians, Injure Several Others, Near Jenin 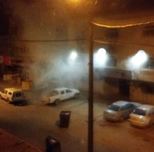 Mustafa Kamil, the head of the Jenin office of the Palestinian Red Crescent Society, said many Palestinians suffered the effects of teargas inhalation, including many who were injured in their homes, after the soldiers fired gas bombs at youngsters who hurled stones and empty bottles on the invading army vehicles.

Kamil added that resident Abdul-Hakim Nassar Zakarna, and his family, including children, suffered the severe effects of teargas inhalation, after one of the gas bombs directly struck their home.

He said the medics rushed to the family home, provided them with the urgently needed medical care, and moved them to a local medical center for further treatment.
Army Kidnaps Three Palestinians In Bethlehem, Jenin And Ramallah

The Bethlehem office of the Palestinian Prisoners Society (PPS) has reported that the soldiers invaded the al-Walaja village, searched a few homes, and kidnapped Bassel Atallah al-A’raj, 21.

The Israeli army said its soldiers conducted searches of homes in Qabatia town, south of the northern West Bank district of Jenin, arrested a young man, and located an M-16 rifle during the search.

Dozens of Israeli army vehicles invaded, on Friday at dawn, various areas in Hebron city, and surrounding communities, in the southern part of the occupied West Bank, stormed and searched homes, and kidnapped several Palestinians.

Media sources in Hebron city said the soldiers invaded and violently searched many homes, interrogated and abducted a number of residents; one of them identified as former political prisoner Hatham Siyaj, from the al-Haqouz area.

The soldiers also fired many gas bombs and concussion grenades in the same area, in addition to invading a home, belonging to members of the al-Hashlamoun family, in the Ras al-Joura area, in Hebron city.

In addition, the army invaded the Sammoa’ town, south of Hebron, before storming a home, belonging to former political prisoner Rasmi al-Mahareeq, and interrogated him along with his family.

During the invasion, the soldiers kidnapped a number of Palestinians, and took them to the Etzion military base and security center.
20 oct 2016
DCIP: 19 Palestinian teens held in administrative detention

Defence Children International Palestine (DCIP) documented, in a statement issued Thursday, the use of administrative detention against 19 Palestinian children since the outbreak of Jerusalem Intifada in October 2015.

Six of them remain in administrative detention over Facebook posts, including two that have since turned 18 years old, according to the group.

Eleven of the children have been released without charge after spending between three and eight months in jail. Two have been charged, convicted, and imprisoned after three months in administrative detention.

Prior to October, Israel had not held a Palestinian child from the West Bank under administrative detention since December 2011.

Israel has the dubious distinction of being the only country in the world that systematically prosecutes between 500 and 700 children in military courts each year that lack fundamental fair trial rights.

International juvenile justice standards, which Israel has obliged itself to implement by ratifying the UN Convention on the Rights of the Child (CRC) in 1991, demand that children should only be deprived of their liberty as a measure of last resort and must not be unlawfully or arbitrarily detained.

DCIP considers all persons below the age of 18 to be children in accordance with the CRC.

DCIP quoted Ahmad H., 17, as recalling his first interrogation at Ofer military prison on August 1, “they asked for my Facebook password.”

“I told [the interrogator] of my arrest earlier in April 2016 for 10 days, when I was interrogated [at Shikma prison] in Ashkelon about my Facebook account. I told him I deleted everything upon my release and the account is clean. I told him to check it.”

Ahmad told DCIP that his interrogator at that point accused him of “obstructing the interrogation, claiming that I had asked someone to delete the photos, but I denied it.”

The interrogation lasted one hour, during which he had no parent present or access to legal counsel, according to the statement.

On August 7, Ahmad was interrogated again, this time for three hours.

“[The interrogator] kept questioning me about posting inciting pictures on my Facebook account. I told him I had not posted anything after my release and I had not asked anyone to delete the ones I had posted.”

“Israeli authorities must immediately stop using administrative detention against Palestinian minors,” said Brad Parker, attorney and international advocacy officer at DCIP. “Inability to file charges against children due to lack of evidence should never be grounds for holding them indefinitely without charge or trial.”

In the same context, a Palestinian rights group has documented the arrest of 2,155 Palestinians children since the outbreak of Jerusalem Intifada.
Health of hunger-striking Abu Fara, Shedid takes turn for worse

According to PPS, prisoners Ahmad Abu Fara and Anas Shedid, held in isolated cells, have gone through sharp health deterioration.

PPS lawyer said following a visit to the detainees in the Ramla prison clinic that both Abu Fara and Shedid have been locked up in isolated cells that are not equipped with basic kit and are disconnected from the outside world.

The Israeli prison authorities also turned down the prisoners’ appeals to have a pen and sheets of paper to write to their families.

Both Abu Fara and Shedid have been on an open-ended hunger strike since September 25 in protest at being held administratively, without trial, and isolated in Israeli prisons.

They further refused to undergo medical check-ups after Israeli medics refused to brief them on the findings of their health checks.

They reportedly have become wheel-chaired and lost over 10 kilograms of their overall weight due to the hunger strike. The detainees have also gone through frequent blackouts and stomachaches. Prisoner Abu Fara is also vomiting blood.

Abu Fara, 29, and Shedid, 19, have been held in administrative detention since August 2.
Palestinian prisoner released after 14 years in Israeli jails

Zaqout, from Gaza Strip, was received by his family and a number of liberated prisoners at Beit Hanoun (Erez) crossing.

The liberated prisoner was arrested on Oct. 22, 2002 for allegedly crossing the border fence and being involved in resistance operations.
Israeli police arrest 3 Palestinian minors

The Israeli police arrested Thursday three Palestinian minors from Lod city within the Green Line for allegedly being involved in stone-throwing attacks.

0404 Hebrew website said that three Palestinian boys aged between 14 and 15 were detained for allegedly throwing stones at settlers’ vehicles.

The Palestinian Prisoners Society (PPS) has reported that Israeli soldiers have kidnapped overnight and on Thursday morning, at least six Palestinians in the West Bank districts of Jerusalem, Jenin, Nablus and Bethlehem.

The PPS stated that the soldiers invaded homes in Jerusalem, searched them, and kidnapped two Palestinians, identified as Amjad Abu Sbeih, 34, and Odai Dabbagh, 17.

In Nablus, in the northern part of the West Bank, the soldiers kidnapped two Palestinians, identified as Abdul-Karim Amin Ghazi, 27, and Mohammad Hussein As’ad, 27, from their homes in Jama’in town, south of Nablus.

A number of Palestinians were kidnapped by Israeli occupation forces (IOF) from the West Bank at dawn Thursday.

Three Palestinian youths sustained rubber bullet wounds, including one in the eye, after they were attacked by the occupation troops who escorted the Israeli settlers all the way through the break-in.

Buses carrying hundreds of other Israeli settlers showed up in the area, sparking clashes with Palestinian anti-occupation youths.

The IOF attacked the Palestinian protesters with randomly-shot spates of rubber bullets and teargas canisters.

Another IOF patrol stormed Nablus’s eastern town of Qaryout and wreaked havoc on the homes of anti-occupation activists.

Member of the local anti-settlement committee, Sadeq al-Qaryouti, said the occupation soldiers broke into his family home and threatened his brother with abduction in case he gets involved in further anti-settlement campaigns.

The IOF also stormed the home of the Director of the Qaryout Charity, Muhammad Mardawi, and the head of Qaryout Society, Muayad Salem.

The IOF further rolled into Jenin’s town of Qabatiya at the crack of dawn and kidnapped a Palestinian youth, 21, from his own family home.

Sounds of heavy gunfire have been detected during the break-in.

A military checkpoint was pitched by the IOF on the Jenin-Haifa Street near Zabouba town.

The IOF further shut down a printing press in al-Ram town under the request of the central region commander on allegations that it attempted to print banners mourning the slain anti-occupation protester Misbah Abu Sbeih.
Page:  10 - 9 - 8 - 7 - 6 - 5 - 4 - 3 - 2 - 1
Powered by