The Israeli forces claimed that the three detainees were involved in stone-throwing attacks.
IOF photographed beating Palestinian in al-Khalil

Photographs taken at the scene showed that at least five Israeli infantry soldiers, from the Nahal Brigade, were surrounding the Palestinian during his arrest.

One of the soldiers was seen kicking him, while another holding him by the throat.

Another photo showed a soldier pinning the Palestinian to the ground with his knee. The Palestinian was seen barefoot in a street in the city.

The Israeli army said the man was resisting arrest, but that the incident was being investigated. The army statement said it was carrying out security checks in the city due to recent attacks in the area.

"During a routine security check, the Palestinian who was documented [in the photos] refused to be frisked. The forces had arrested the suspect.

The troops' conduct is being looked into and the incident is being investigated." Photos of the arrest were soon published on social media networks.

In the same context, the paper published that two Israeli soldiers from the Nahal Brigade were caught on camera overnight Wednesday-Thursday setting a Palestinian storehouse in the West Bank city of Nablus on fire. Security footage obtained by Channel 2 showed the troops approach a stockpile of planks belonging to a Palestinian lumber salesman, adjacent to the storehouse, while holding a burning object.

The pair proceed to set the boards alight. The two soldiers, wearing helmets and vests, leave the area as the fire spreads to the building. The army claimed it was investigating the incident.
Report: 1800 Palestinian sick prisoners held in Israeli jails

The number of Palestinian prisoners held in Israeli jails has increased to 1,800. Some 120 of whom suffer very difficult heath conditions, a PA official source revealed in a statement issued Saturday.

The committee pointed out that the sick prisoner Bassem al-Sayeh, who suffers both bone marrow and blood cell cancer, became unable to speak or to sleep after his health situation sharply worsened.

The statement also pointed to the case of Mohamed Radwan who suffers neck and face swelling. He was transferred to Afula hospital more than once, however, he did not receive any treatment except painkillers.

The prisoner Hassan al-Qadi is currently held in Ramla prison hospital suffering from Israeli gunshot injuries in his back and abdomen, in addition to his right leg. Al-Qadi became unable to walk although he underwent several medical operations in Israeli hospitals.

The prisoner Mohamed Waheish, 19, also suffers gunshot injuries as he was injured and brutally attacked by Israeli settlers under Special Forces’ protection.

The researcher at the committee Abdul Nasser Farawna affirmed that Palestinian sick prisoners are subjected to systematic medical neglect.

Hundreds of Palestinian prisoners lost their lives in Israeli jails or shortly after their release due to the Israeli deliberate medical neglect.
IOF arrests 1000 Palestinian children

The Israeli Occupation Forces (IOF) arrested since the beginning of 2016 more than 1000 Palestinian minors aged between 11 and 18, a rights group revealed.

The Palestinian committee for prisoners’ affairs affirmed in a statement issued Saturday afternoon that detained Palestinian minors are subjected to inhuman treatment at the hands of Israeli jailers.

The detained minors’ number has increased by 80% in comparison with 2015, the committee added.

The statement pointed out that some of the detained minors were held under administrative detention according to which they are detained without charge or trial.

Some others were subjected to high prison sentences with heavy fines, according to the statement.

Since the start of the year, 70 Jerusalemite children were placed under house arrest. The committee underlined that Israeli jailers systematically practice torture against the detained minors.
Cancer Stricken Detainee Held In Solidarity Confinement For Fourth Consecutive Year

Shireen Iraqi, a lawyer with the Palestinian Detainees Committee, has reported that detainee Mousa Sofan, who is serving a 33-year imprisonment sentence by Israel, has been in solitary confinement for the fourth consecutive year despite his bad health condition.

Iraqi stated that Mousa Sofan, 41, from the Northern West Bank city of Tulkarem, has already served 15 years of his 33-year sentence, and has been held in solidarity for four consecutive years.

She added that the detainee is currently held in solitary in Majeddo Israeli prison, and that on June 28, 2016, an Israeli court in Nazareth ruled to keep him in solitary confinement for four additional years for what the court said “posing a threat to the security of Israel.”

The court claimed that the file against the detainee is confidential; therefore, even his lawyer cannot see it.

Iraqi added that Sofan has cancer, and underwent a surgery on December 24 2015, when the doctors removed a tumor, but he was not given any medications or underwent follow-up.

“Sofan has been held in solitary confinement since June 12, 2012; this led to various physical and psychological complications,” she said, “He went on hunger strikes several times, demanding to be removed from solitary confinement, but to no avail.”

It is worth mentioning that Sofan told the lawyer that the solitary confinement section in Majeddo is called “Section 12” and that every detainee there is only allowed out of the cell one hour a day, on his own, as the prison administration only takes one detainee out of his cell at a time.

“The detainees held in solitary are mostly not allowed any family visits,” the detainees told his lawyer.

Malik al-Qadi, who waged a hunger strike for 70 days in Israeli jails in protest at his administrative detention, has been transferred to a Palestinian hospital on Saturday, the Palestinian Red Crescent said.

Al-Qadi was transferred in the morning from the Israeli Wolfson Medical Center to the Istishari Arab Hospital in the occupied West Bank city of Ramallah, the sources explained.

Head of the Palestinian Committee of Prisoners Affairs Issa Qaraqe said that al-Qadi is to be transferred in a Palestinian ambulance and will remain in intensive care unit in the Istishari Arab hospital.

Al-Qadi ended his hunger strike on Wednesday, along with fellow prisoners Muhammad and Mahmoud al-Balboul, after an agreement with the Israeli prison service not to renew their administrative detentions.
6 arrests in Nablus, clashes erupt in Jenin

Israeli forces stormed the city in large numbers after closing all the entrances leading to it and neighboring checkpoints, preventing people’s movement in both directions.

Eyewitnesses told the PIC reporter that the clashes broke out when several Israeli military vehicles broke into Kafer Qalil town southeast of the city.

At least five arrests were reported during the clashes. Another young man was detained at a military checkpoint erected between Nablus and Tulkarem.

All the detainees were taken to unknown detention centers. Similar clashes erupted in Zabouba town west of Jenin where tension is still simmering for more than two weeks.

Local sources affirmed to the PIC reporter that the clashes broke out when Israeli forces stormed the town amid heavy firing of teargas bombs. Several locals suffered from teargas inhalation due to the excessive firing of teargas bombs between the houses.
IOF summons locals in Bethlehem, closes Nablus entrances

The Israeli Occupation Forces (IOF) stormed at dawn Saturday Bethlehem to the south of the West Bank and summoned five ex-prisoners for investigation.

The ex-prisoners were summoned for investigation in Etizon military center. On the other hand, Israeli forces continued for the second day in a row to close all entrances leading to Nablus city and the neighboring checkpoints, restricting the people’s movement in both directions.

The Israeli military restrictions came after Israeli media sources claimed that an Israeli settler was missing in the area, while locals speculated that it could be a part of Israeli military training. Meanwhile, Israeli forces confiscated the surveillance cameras in al-Quds Street in the city for unknown reasons.

Several Israeli military jeeps invaded, on Saturday at dawn, a number of communities in the West Bank district of Bethlehem, and summoned three Palestinians, including an elderly man, for interrogation at the Etzion military base, north of Bethlehem.

The soldiers invaded the home of a former political prisoner, identified as Ja’far Abdullah al- ‘Arouj, 30, in al-‘Arouj village east of Bethlehem, and summoned him for interrogation.

In addition, the soldiers invaded the al-‘Obeydiyya town, northeast of Bethlehem, and summoned Majdi Mousa Radayda, 28, for interrogation also in Etzion.

In Bethlehem city, the soldiers invaded Hindaza area, and summoned Mohammad Kamel Sha’lan for interrogation in Etzion. Sha’lan is the father of Othman, who is imprisoned by Israel.

The soldiers also posted a leaflet on the main door of a Palestinian home, threatening “harsh punishment if they jeopardize the security of Israel,” but didn’t even invade the property or talk to the family.
23 sept 2016
IOA summons al-Talahma’s brothers

Al-Talahma was shot and killed in September 2015 by Israeli soldiers after throwing a grenade at an Israeli military vehicle while storming the town.
100 Gazan businessmen kidnapped by Israeli army since 2015

Since the start of 2015, the Israeli occupation army has kidnapped over 100 businessmen during their travel through the Beit Hanoun (Erez) border crossing, north of the Gaza Strip, and revoked entry permits for about 40 percent of them.

According to al-Mizan Center for Human Rights, the Israeli army escalated lately its arrest of Gazan businessmen, although they already obtained travel permits.

The Israeli army also prevented, during the same period, 200 companies from conducting transactions overseas and banned the entry of many raw materials and needs used in manufacturing industry.
Army Injures A Palestinian Child In Hebron 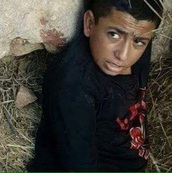 Israeli soldiers shot, on Friday, a Palestinian child near Keryat Arba’ illegal colony, east of Hebron city, in the southern part of the occupied West Bank, after he reportedly attempted to stab an Israeli soldier.

Israeli sources said “the soldiers shot the child, 14 years of age, in his abdomen, causing moderate-to-serious wounds, after he attempted to stab a soldier.”

The sources said no soldiers were hurt in the reported incident, and that the soldiers are looking for another Palestinian, who accompanied the child, and ran away after the shooting.
Israeli Soldiers Kidnap Eight Palestinians In Bethlehem

The home invasions were first carried out by undercover Israeli soldiers, before the army invaded the neighborhoods, and took the kidnapped Palestinians away.

Sep 23, 2016 @ 09:40: The Bethlehem office of the Palestinian Prisoners Society (PPS) said the soldiers broke into and searched many homes in the refugee camp, and kidnapped the six Palestinians.

Clashes took place between the invading soldiers and many local youths, who hurled stones at the armored military vehicles, while the soldiers fired gas bombs and concussion grenades.