Palestine Center for Prisoners Studies revealed that 8,000 arrests were reported since last October including 2,155 minors, 270 women, and 250 online activists.

The center pointed out that most of the detainees were subjected to severe torture and ill-treatment in Israeli jails and detention centers. 1,773 administrative detention orders were also issued during the reported period, the report added.

40 female minors and four Palestinian MPs were also among the documented arrests. During the reported period, 110 old men over the age of 60, 23 academics, 190 people with special needs, and 79 journalists were detained.

The center said that two Palestinian prisoners died in Israeli jails due to the Israeli deliberate medical negligence.
Palestinian MP among dozens of detainees in W.B.

The Israeli Occupation Forces (IOF) launched at dawn Wednesday a large-scale raid and arrest campaign throughout the West Bank and Jerusalem. 26 Palestinians were detained during the pre-dawn campaign including a Palestinian MP and ex-prisoners.

Israeli Army affirmed that 19 “wanted” Palestinians were arrested Wednesday for being involved in anti-occupation attacks.

Three arrests were carried out in Qabatia town south of Jenin, while two others were reported in Tulkarem. Four more detainees were arrested south of Ramallah.

Three Palestinian were rounded up in occupied Jerusalem while six others were kidnapped from their houses in al-Khalil including activists in Hamas Movement.

The Palestinian MP for Hamas Movement Jamal al-Natsheh was among al-Khalil’s detainees, where Israeli forces brutally broke into his house and took him to unknown detention center only seven months after his release from Israeli jails.

The PPS said the soldiers violently searched several homes in different parts of Jerusalem, and interrogated many young men, before kidnapping fifteen of them.

Israeli soldiers invaded, on Wednesday at dawn, the village of Budrus, west of the central West Bank city of Ramallah, searched many homes and kidnapped five Palestinians. 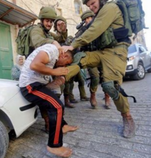 The Hebron office of the Palestinian Prisoners Society (PPS) has reported that Israeli soldiers have kidnapped, on Wednesday at dawn, five Palestinians in Hebron city and the al-Fawwar refugee camp.

It added that the soldiers also invaded al-Fawwar refugee camp, south of Hebron, and kidnapped Abdul-Qader at-Teety, after invading his property and searching it.

The soldiers also invaded and searched many homes in the town, including the home of Mohammad Zeidat, who said that the soldiers stole 51.000 Jordanian Dinars and a kilogram of gold, while searching his property. 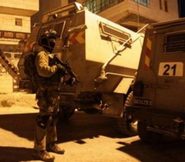 Israeli soldiers invaded, on Wednesday at dawn, the al-Khader town, south of Bethlehem, searched homes and kidnapped one Palestinian.

Ahmad Salah, the media coordinator of the Popular Committee against the Wall and Colonies in al-Khader, said the soldiers kidnapped a young man in his twenties, identified as Mohammad Rashad Issa.

Salah added that the soldiers invaded and violently searched a number of homes, including Issa’s property in the Old City of al-Khader, before kidnapping him, and took him to Etzion military base, south of Bethlehem.
Israeli Soldiers Kidnap Two Palestinians Near Jenin

Several Israeli military vehicles invaded, on Wednesday at dawn, the town of Qabatia, south of the northern West Bank city of Jenin, and kidnapped two Palestinians. The soldiers also invaded Jaba’ nearby town, and summoned a number of youngsters for interrogation.

The Jenin office of the Palestinian Prisoners Society (PPS) said the soldiers invaded Qabatia, searched a number of homes and kidnapped two.

The kidnapped Palestinians have been identified as Mohammad Bassem Assaf and Soheib Naji Abu al-Rob.

In addition, the soldiers invaded Jaba’ town, south of Jenin, searched several homes and summoned many young men for interrogation. 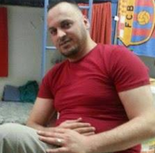 Palestinian detainee Jawad Jawareesh, 40, declared hunger strike this past Sunday from his solitary confinement cell in the Ramon Israeli prison, protesting ongoing violations, and his repeated transfers from one prison to another without any reason but to keep his restless.

The detainee is from the West Bank city of Bethlehem, and is a married father of two children; he was a member of the Al-Aqsa Brigades, the disbanded armed wing of Fateh movement, and was sentenced to 40 years after his abduction in 2002.

It is worth mentioning that the administration in Eshil Israeli prison has recently decided to vacate all political prisoners, and transferred detainees, who are members of Hamas to Ohalei Qidar prison, and Fateh detainees to Nafha.

Jawareesh was one of the detainees moved to Nafha, but instantly after being moved there, the soldiers moved him to Ramon prison.

He protested being singled out, and demanded to be transferred back, but the prison administration refused, placed him in solitary confinement after several soldiers assaulted him; he then started a hunger strike.

Mohammad Hamida, the head of the Association of Palestinian Prisoners and ex-Prisoners “Hossam,” said that what Jawareesh is going through is part of a policy used by Israel against the detainees.

Hamida said that when the detainees are frequently moved from one prison to another, they can never have any sense of stability, and are deprived from family visits in addition to being prevented from communicating with other detainees.

He called on international human rights and legal groups to intervene and stop the constant and escalating violations against the detainees, and the illegal policies of medical neglect, which recently claimed the life of detainee Yasser Hamdouni.
27 sept 2016
Qaraqe: Israeli jails turned into death camps

Head of the Palestinian committee for prisoners’ affairs Issa Qaraqe said Tuesday that Israeli prisons have turned into death camps for Palestinian prisoners.

Qaraqe pointed out that nine Palestinian prisoners died since 2000 due to the Israeli deliberate medical negligence.

He blamed the Israeli authorities for Yasser Hamdouni’s death, which he said was a result of their deliberate medical negligence.

Hamdouni had earlier sent a letter in 2015, in which he launched a cry for help as his health situation had greatly worsened due to the Israeli systematic and deliberate medical negligence.

Qaraqe held the Israeli prison authorities responsible for Hamdouni’s death, saying the casualty was not treated for the critical cardiovascular disorders he had been suffering from despite his frequent cries for help.

He called on PA chairman Mahmoud Abbas to prosecute Israel at the International Criminal Court over its deliberate medical negligence policy. He also called on the United Nations to form an investigatory committee to check on the sick prisoners’ detention conditions.
IOA renews Palestinian prisoner’s administrative detention

Tamimi was arrested on July 24, 2014 and he was held since then in administrative detention.

Israeli authorities have refused more than once appeals submitted by Tamimi’s lawyer in protest against his renewed detention without charge or trial.

Tamimi, a father of one child, is held in Negev prison amid very difficult detention conditions.
Jerusalemite prisoner released after serving 18 years

The Palestinian prisoner Ibrahim al-Abbasi, 55, was released from Israeli custody on Monday evening after serving an 18-year sentence.

Al-Abbasi, from Silwan town in occupied Jerusalem, was detained on Sept. 26, 1998, and was convicted of being affiliated with the Hamas Movement after some three months of interrogation in al-Maskoubiya detention center.

He was engaged in numerous collective and individual hunger strikers. Most recently was in 2014 for 28 days.

He was held in solitary confinement for five months shortly after his arrest. He suffers several health problems due to the unbearable torture he was subjected to during his interrogation.

He spent 27 days in Bosta vehicle, a metal vehicle where prisoners are shackled to metal chairs for long hours or days.

Shadid, who is currently held in Ofer prison, was sentenced to six months in administrative detention according to which he is held since his arrest last August without charge or trial.
Israeli army claims confiscation of weapons in Jenin campaign

The Israeli occupation army claimed its forces seized on Sunday night weapons during raids on homes in Jenin city.

According to its website, the forces found four guns, ammunition and parts of weapons stashed inside homes in Jenin.

The army also said that its forces closed two workshops used to manufacture weapons in Jenin.

There is still no confirmation from local sources about these Israeli claims.
Israeli Army Kidnaps 17 Palestinians In The West Bank

The Palestinian Prisoners Society (PPS) has reported that Israeli soldiers have kidnapped, overnight and at dawn Tuesday, seventeen Palestinians in different parts of the occupied West Bank, including nine in occupied Jerusalem.

The PPS said the soldiers invaded and violently searched many homes in Jerusalem, and kidnapped Rami Fakhouri, Ahmad Shaweesh and Mohammad Hzeina, from the Old City.

It added that the soldiers also searched and ransacked homes in Shu’fat refugee camp, in Jerusalem, and kidnapped six Palestinians, three of them have been identified as former political prisoners Mahmoud Abu Khalifa, Daoud Resheq and Yousef Taha.

In addition, the Bethlehem office of the PPS has reported that the soldiers searched homes in the district, and kidnapped four Palestinians, identified as Moath Abdul-Jabbar Abu Tarboush, 30, Yousef Sayel Issa, Ammar Abu Aker and Shadi Badawna.

The PPS said the kidnapped have been identified as Odai Salama al-Jondi, Mohammad Nabil al-Qeeq and a college student, identified as Amro Amjad al-Haddoush.

The camp has been recently subject to nighty invasions, violent home searches and many abductions carried out by the Israeli army.

In addition, the soldiers invaded Sa’ir town, and demolished wells used by local farmers and shepherds for irrigation and for their livestock.

Local sources said this is the second time the soldiers demolish wells in the same area in nearly 45 days, as the army also demolished residential sheds and barns.