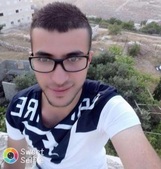 The Israeli Supreme Court suspended Friday the administrative detention of the prisoner Malik al-Qadi who has been on hunger strike for 53 days.

A local rights group affirmed that al-Qadi’s lawyer had earlier submitted an appeal for his immediate release after his health sharply deteriorated.

Despite the suspension of his detention, al-Qadi will not stop his hunger strike till his immediate release, his lawyer pointed out.

Al-Qadi had been suffering from sharp pains in his head, chest, and abdomen. He also started suffering vision problems as he became unable to speak or to move.

Al-Qadi, from Bethlehem, was arrested in May 2016 and was held since then in administrative detention, internment without charge or trial.

There are currently three prisoners on hunger strike protesting their administrative detention, including al-Qadi, and brothers Muhammad and Mahmoud Balboul.
2 prisoners subjected to torture in Israeli jails

The Palestinian Committee for Prisoners Affairs affirmed Friday that a number of Palestinian prisoners were subjected to torture in Israeli investigation and detention centers including minors.

Following his visit to Ofer prison, the committee’s lawyer Loay Akka quoted the prisoner Mohamed Wahish, 19, who is currently held in Ofer prison as stressing that he was subjected to severe torture and ill-treatment during his detention.

"I was shot with a rubber bullet from zero distance before being brutally attacked by five Israeli soldiers despite the injury," Wahish narrated.

He pointed out that his leg was broken during the attack but he didn’t receive the required medical treatment.

For his part, the prisoner Adnan Malesh, 19, affirmed that he was directly shot with three live bullets in his left leg and another one in his right leg, leading to a severe bleeding.

He was then dragged by Israeli forces and hit on his head, according to his statement. During his investigation, he was also subjected to severe beating.
Prisoner Sayeh loses speech ability, his health worsens 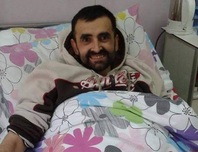 Prisoner Bassam As-Sayeh has lost his ability to speak completely after a slight improvement last week and his health condition has reached a life-threatening stage, according to his wife, Mona As-Sayeh.

A lawyer, who visited the prisoner on Thursday, told the wife about the seriousness of the prisoner's medical condition, and affirmed that his name was put on the waiting list for a heart surgery to provide him with a pacemaker to help control his abnormal heart rhythms.

Sayeh appealed to human rights groups to swiftly intervene to save the life of her husband. The health condition of prisoner Sayeh is considered the most serious one in Israeli jails.

He suffers from leukemia, bone cancer, a heart muscle problem and a severe lung inflammation. He was taken prisoner en route to a court hearing held on October 8, 2015 for his detained wife, Mona, at the military court of Salem near Jenin. His wife was released later.
Israel releases 6 Gaza fishermen

The Israeli occupation navy arrested the six fishermen and confiscated their boat after it chased them down off Gaza’s coast.

Over recent months, dozens of Palestinian fishermen were kidnapped by the Israeli occupation navy while they were setting sail within the allowed fishing zone.
Israeli Soldiers Invade Two Towns In Bethlehem, Kidnap One Palestinian

Israeli soldiers invaded, on Friday at dawn, the towns of Beit Fajjar and Za’tara, in the West Bank district of Bethlehem, searched homes and kidnapped one Palestinian.

Several army vehicles invaded Za’tara town, east of Bethlehem, before the soldiers kidnapped Mohammad Yousef Abu Amriyya, 23, after breaking into his home and searching it.

The soldiers also invaded Beit Fajjar town, southeast of Bethlehem, stopped many cars and searched them, in addition to inspecting the ID cards of many Palestinians.

Army vehicles drove through several neighborhoods in the town, and patrolled them before stopping many cars and residents.
Israeli Navy Kidnaps Five Fishers In Gaza, Confiscates Their Boat

Israeli navy ships opened fired, on Thursday, at a number of Palestinian fishing boats close to the shore in the besieged Gaza Strip, kidnapped five fishers and confiscated their boat.

Zakariyya Bakr, the head of the Fishers Committees at the Union of Agricultural Committees, said the navy ships fired many live rounds towards the boats, west of Wadi Gaza area, less than 4 nautical miles from the shore, and kidnapped five fishers.

The attack is part of frequent violations against the fishers in Gaza waters, in addition to attacks targeting workers and farmers in Palestinian lands across the border fence.
8 sept 2016
Settler runs over elderly Palestinian farmer near Bethlehem

An Israeli settler deliberately ran over an elderly Palestinian farmer Thursday morning near al-Khuder town south of Bethlehem to the south of the occupied West Bank.

According to the PIC reporter, the farmer Hassein Mussa, 65, was hit and injured by a settler’s car at the main street in the town.

Israeli ambulance refused to transfer the injured old man to the hospital and left him bleeding for long hours till being moved by the Palestinian Red Crescent for treatment.

Residents of al-Khuder town are always subjected to Israeli hit-and-run attacks due to their strong resistance against settlement construction on their lands.

Palestinian Injured After Being Rammed By Colonist’s Car Near Bethlehem 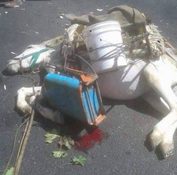 A Palestinian farmer from the al-Khader town, south of the West Bank city of Bethlehem, suffered several fractures and bruises, Thursday, after being rammed by a speeding Israeli colonist’s car, on a bypass road #60, used by both Palestinians and Israelis.

Medical sources said the wounded Palestinian man has been identified as Hussein Daoud Mousa, 65, and that he was heading back home.

It later became known that the settler who rammed the Palestinian is also a soldier with the Israeli military, and was driving a civilian car.

An Israeli ambulance was called to the scene, but the medics didn’t want to transfer the wounded man to an Israeli hospital and said he should be moved to a local Palestinian hospital, but his sons insisted especially since he was injured by an Israeli driver.

It is worth mentioning that the man was riding his donkey when the incident took place, and his donkey was also struck and wounded.

The soldiers also cuffed the wounded man’s son, after he rushed to the scene, and abducted him.
Israeli Soldiers Kidnap Seventeen Palestinians In The West Bank, Injure One In Gaza 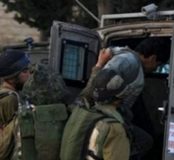 The Palestinian Prisoners Society (PPS) has reported that Israeli soldiers have kidnapped, on Wednesday evening and at night, and earlier on Thursday, seventeen Palestinians, including two children, in the occupied West Bank. The soldiers also shot one Palestinian in Gaza.

The Jerusalem office of the PPS said the soldiers kidnapped five Palestinians, including two siblings and two children.

The PPS said that resident Mohammad Jihad Za’tary, 19, from Silwan town, in occupied East Jerusalem, was kidnapped from his work in Pisgat Zeev.

On Wednesday at night, the soldiers kidnapped two children, identified as Fathi Nasser and Mustafa Abu Bakr, members of a scout troupe that was preparing for a campaign to clean the Al-Aqsa Mosque.

The two children were placing campaign posters on a number of walls, preparing for an activity that is planned for Friday, ahead of the Al-Adha Muslim feast.

In addition, the soldiers invaded Surif town, searched homes and kidnapped Anan Abdul-Hamid Ekhlayyel, 21, and Mohammad Hasan ‘Aadi, 22.
The soldiers also invaded the home of Yahya Saleh, searched his property and summoned him for interrogation in the Etzion military base and security center.

In the Nablus district, in the northern part of the West Bank, the soldiers kidnapped two Palestinians, identified as Ismael Mohammad Kalbouna, 21, and Hisham Mohammad Bishkar, 21.

Also on Wednesday evening, the soldiers invaded Qabatia town, south of the northern West Bank city of Jenin, and kidnapped one Palestinian, identified as Sabri Kamil, after breaking into his home and searching it.

In the Gaza Strip, the soldiers, stationed on military towers across the border fence, shot and injured an 18-year-old Palestinian in Abu Safiyya area, east of Jabalia, in the northern part of the coastal region.
Army Kidnaps A Young Man And Two Children In Jerusalem

Za’tary is from Sweih neighborhood, in Silwan town, south of the Al-Aqsa Mosque.

On Wednesday at night, the soldiers kidnapped two children, identified as Fathi Nasser and Mustafa Abu Bakr, members of a scout troupe that was preparing for a campaign to clean the Al-Aqsa Mosque.

The two children were placing campaign posters on a number of walls, preparing for the activity that is planned for Friday, ahead of the Al-Adha Muslim feast.

The soldiers took the two children to an interrogation center in the city, and will later send them to court, Silwanic added.

On Wednesday evening, the soldiers invaded Qabatia town, south of the northern West Bank city of Jenin, and kidnapped one Palestinian, identified as Sabri Kamil, after breaking into his home and searching it.
14 Palestinians kidnapped by Israeli army in predawn sweep

At least 14 Palestinians were kidnapped by the Israeli occupation forces (IOF) from the West Bank at predawn time on Thursday.

The IOF kidnapped ex-prisoner and Hamas leader Ahmad Zeid, 48, after they wreaked havoc on his family home at the al-Jalazoun refugee camp, to the north of Ramallah city, at 2 a.m.

Ex-prisoner Fadi Darwish and citizen Saher al-Barghouti were also kidnapped by the IOF from the city.

The occupation troops stormed Nablus province and kidnapped the Palestinian ex-prisoner Hisham Beshkar from the Askar refugee camp, to the east.

An assault on Sebastiya town overnight led to the abduction of youngster Anan Bahlak following clashes with the occupation troops.

Meanwhile, three Palestinian citizens were kidnapped by the IOF from the southern occupied West Bank province of Bethlehem.

Youngsters Anan Ikhlil and Muhammad Adi, both in their early 20s, were kept in custody after they were summoned to questioning in the Gush Etzion camp. Both are natives of al-Khalil’s northern town of Beit Ummar.

At the same time, the IOF stormed Qabatiya town, in Jenin, and kidnapped citizen Sabri Kmeil. The campaign culminated in the abduction of the two brothers Hamed and Adam Shafiq Ubaid, along with youngster Shadi Muheissen, from al-Issawiya town in Occupied Jerusalem.

Youngster Rami Mahmoud was kidnapped by the IOF from Jerusalem’s Qalandiya refugee camp as he passed through the Container checkpoint.
Video: Hunger-Striking Detainee Loses Eyesight, Continues His Strike
“I will remain steadfast, my will is strong,” he told his mother while both of them cried together on the phone, “I miss you so much, I miss everybody, we are the sons of Ahmad, we are strong and determined to remain strong.”

His mother told him how worried she is, and how much she misses him.

In related news, Lawyer Eyad Misk, the General-Director of the Legal Unit of the Palestinian Detainees Committee, stated Wednesday that the Israeli High Court “froze” the Administrative Detention orders against the Balboul brothers, but did not void the order.

Misk added that such a ruling does not cancel the brothers’ arbitrary Administrative Detention order, which means that after the two finish medical treatment, they could be facing additional detention orders, also without charges.

The Detainee’s Committee said the Balboul brothers rejected the Israeli decision, and said that the only way to stop their strikes is for Israel to completely cancel the Administrative Detention orders.

The Committee held Israel responsible for the lives of the two detainees, and called for their immediate and unconditional release.
Page:  5 - 4 - 3 - 2 - 1
Powered by