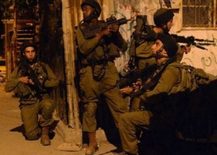 Israeli soldiers kidnapped, Wednesday, nine Palestinians, including a young woman and four members of her family, in different parts of the occupied West Bank.

The two were first summoned for interrogation after the soldiers invaded and searched their homes at dawn, and summoned them for interrogation, and were taken prisoner at noon after they went to Etzion military base and security center. Two Palestinians were kidnapped during the invasion.

In Bethlehem, the soldiers kidnapped a young Palestinian man, in his twenties, after stopping him at military roadblock #300, leading to occupied Jerusalem, and took him to an unknown destination.

In addition, the soldiers kidnapped a young man, identified as Bassam Shaweesh, from the al-Far’a refugee camp, south of Tubas in central West Bank, after the army installed a roadblock at the main entrance of the camp.

Furthermore, the soldiers kidnapped a young woman, identified as Lana Bilal Summoudi, 19, and four of her relatives, after stopping them at the al-Jalama military roadblock, north of Jenin in the northern part of the occupied West Bank.
IOF arrests 2 Palestinians in al-Khalil

Local sources affirmed that the young men Nayef Khalil, 19, and Adel Zakrawi, 20, were arrested after being summoned for investigation in Etzion military camp.

Israeli forces earlier stormed the two detainees’ houses in Beit Ummar town and handed both of them notices ordering them to appear before Israeli Etzion military comp north of the town.

Three other locals including Adel’s brother and two minors were arrested in the predawn raid into the town.
IOF arrests Palestinian at checkpoint south of Nablus

Eyewitnesses told the PIC reporter that Israeli forces stopped a Palestinian vehicle at the checkpoint and arrested a passenger for half an hour.

The name and exact age of the reported passenger, who was maltreated all through his detention period, remained unknown.
3 Palestinians kidnapped by IOF for smuggling resistance jeeps to Gaza

The Israeli occupation forces (IOF) kidnapped three Palestinians from 1948 Occupied Palestine on allegations of passing vehicles to the al-Qassam Brigades, the armed wing of Hamas Movement.

The Israeli Radio quoted Israeli security sources as saying that three Palestinians were nabbed by the occupation army in the Negev on suspicion of involvement in a network of smugglers who funneled over 100 jeeps to resistance fighters in the blockaded Gaza Strip.

The jeeps were reportedly disassembled and hidden in cargo shipments before they were sent out to Gaza via the Karam Abu Salem crossing.

Experts in the Palestinian-Israeli affairs said the piece of news was made up by the Israeli occupation forces as a pretext to tighten the blockade imposed on the coastal enclave of Gaza for 10 consecutive years.

Over recent years, Palestinian traders and civilians have run out of consumer products and raw materials due to the tight restrictions imposed by the Israeli occupation authorities on the exports and imports to and from the Gaza Strip.
PalMed: Israeli force-feeding law incitement to murder

The Assembly of Palestinian doctors in Europe (PalMed) warned on Wednesday of the serious upshots of an Israeli bill to force-feed Palestinian hunger-striking detainees, saying the law amounts to a legitimization of murder.

PalMed Chairman, Dr. Mondher Rajab, slammed the Israeli force-feeding law, dubbing it a barefaced incitement to the murder of Palestinian hunger-strikers in Israeli jails and a call to torture.

The Assembly also said that feeding induced by threats or coercion is inhumane and that it violates the 1975 World Medical Association Declaration of Tokyo which explicitly states that force-feeding is a crime and a form of torture.

The statement also pointed to the serious health complications of this cruel measure on the prisoners' health; as it is very painful and it may lead to death as what actually happened with a number of Palestinian prisoners.

In earlier statements, the Assembly called on international health institutions, and human rights organizations, including the United Nations, the Red Cross, and Doctors Without Borders, to immediately condemn the Israeli decision and pressure the occupation government to cancel it, improve the prisoners' detention conditions, and allow doctors' visits to check on the prisoners' health status.

The Supreme Court of Israel on Sunday ruled to allow for the force-feeding of Palestinian prisoners who are on hunger strike after a panel of judges rejected a petition which called to cancel the force-feeding bill.

The Knesset voted the "force-feed" bill into law in July 2015, with 46 MKs voting in favor and 40 voting against. The ruling upheld a 2015 law to allow force-feeding as constitutional, despite a range of objections by human rights organizations.

Hunger strikes have become a high profile means by which Palestinians can peacefully resist their capture and arbitrary detainment by Israeli authorities.

There are currently three Palestinians – detained without charge – in Israeli prisons who are on hunger strike one of whom, Al-Qadi, 25, slipped into a coma last week.
Palestinians kidnapped by Israeli army in predawn sweep

At least five Palestinians were kidnapped by the Israeli occupation forces (IOF) at predawn time on Wednesday following assaults on the West Bank provinces and Jerusalem.

Two Palestinians were kidnapped by the IOF at the crack of dawn on allegations of involvement in anti-occupation activities.

At predawn time, the occupation army claimed responsibility for the abduction of two Palestinians from the Qalandiya refugee camp, in northern Occupied Jerusalem, and another from eastern Qalqilya province on charges of anti-occupation activism.

Local sources said the IOF kidnapped Abdullah Assaf, the brother of slain Issa Assaf, from the Qalandiya refugee camp and dragged him to an unknown location.

At the same time, the Israeli occupation soldiers ordered the Palestinian citizen Kamel Nayef Ikhlil to turn his son in to the Israeli intelligence.
50 Palestinian prisoners to go on hunger strike

50 Palestinian prisoners declared their intention to go on hunger strike in solidarity with Mohamed and Mahmoud al-Balboul and Malik al-Qadi, the Palestinian Prisoners Society (PPS) revealed.

The rights group affirmed that 50 prisoners affiliated with Jihad and Fatah movements and held in Negev, Nafha, Ofer, and Raymond prisons are scheduled to wage a solidarity hunger strike in support of the three hunger strikers’ demands.

There are currently three Palestinians – detained without charge – in Israeli prisons who are on hunger strike one of whom, Al-Qadi, 25, slipped into a coma on Saturday.

There are currently over 7,000 Palestinians being held in Israeli jails and detention facilities, seven Palestinian lawmakers among them.

Three Palestinian Legislative Council members are in “administrative detention,” according to the Palestinian prisoners’ rights group Addameer. The practice allows the Israeli regime to keep detainees without charge for an indefinite period of time.

Some prisoners have been held in administrative detention for up to 11 years. 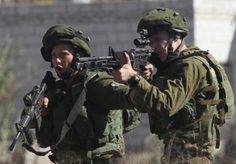 The Hebron office of the Palestinian Prisoners Society (PPS) said the kidnapped Palestinians have been identified as Amro Mohammad Awad, 16, and Odai Issa Zakrawi, 22.

It is worth mentioning that Zakrawi is a volunteer with the Red Crescent medical services in Hebron.

In addition, the soldiers invaded the home of Kamel Nayef Ekhlayyel, and informed him that they need to interrogate his son at the Etzion military base.

The son is a student of Birzeit University, in Birzeit in central West Bank, while the soldiers informed his father that he needs to return to Hebron in order to be interrogated.
13 sept 2016
IOA slaps visit ban on Palestinian detainee

The Israeli occupation authorities (IOA) denied prisoner Murad Izzedine Fatash the right to family visits in Israeli custody. Family sources said the lawyer saw Fatash in the court hall but was prevented from talking to him.

Fatash was kidnapped by the occupation soldiers at the Zaatara checkpoint in southern Nablus on August 28. He has been subjected to several abductions on account of his anti-occupation activism at the university.

The detainee’s brother, Adam, said prisoner Ishtiyeh was transferred to administrative detention under the security-file pretext. Musaab Ishtiyeh had spent 16 months in Israeli jails, where he had been subjected to harsh torture and preplanned medical neglect.

Israeli soldiers kidnapped, on Monday evening, a young Palestinian man at the Container roadblock, northeast of Bethlehem, in the occupied West Bank.

The soldiers stopped and searched dozens of cars, and interrogated many Palestinians while inspecting their ID cards, and kidnapped the Palestinian.

The Palestinian Prisoners Society (PPS) said the kidnapped young man has been identified as Rafat Nael Shafiq, 28, from Ramallah, and that the soldiers took him to an unknown destination.
Army Kidnaps Three Palestinians In Hebron 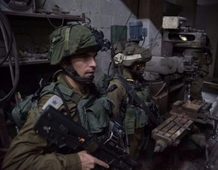 Israeli soldiers kidnapped, late at night Monday, three young Palestinian men, reportedly after they hurled stones and paint on a settlement bus, near the al-‘Arroub refugee camp, north of the southern West Bank city of Hebron.

The army said the bus’s windshield shattered, and became covered with paint, and that the three detained Palestinians “are the ones who carried out the attack.”

The army claimed that the three “planned to cause the bus to crash,” by making the driver lose control, after becoming unable to see through the windshield.
Army Injures Four Palestinians Near Nablus 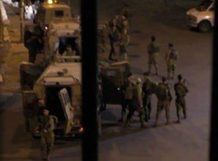 Media sources in Nablus said the soldiers invaded Qosra village, and clashed with many local youngsters who hurled stones and empty bottles on the military vehicles.

The soldiers fired many live rounds, wounding three Palestinians, while a fourth was shot with a rubber-coated metal bullet, before Palestinian medics rushed them to hospital suffering moderate wounds.