Dozens of Israeli settlers on Saturday stormed the market of the Old City of al-Khalil and harassed Palestinian citizens.

Escorted by the Israeli occupation forces (IOF), the settlers carried out provocative tours in the market and disrupted the movement of Palestinian citizens in the Old City's streets.

Meanwhile, the IOF stopped the Islamic Awqaf employee Islam Zahdeh while he was heading to his work, arrested him, and transferred him to an unknown destination.

Islamic Awqaf employees and other Palestinians working for Palestinian institutions in the Old City are constantly harassed by Israeli settlers and soldiers. These attacks come within the framework of an Israeli plan to pressure Palestinian citizens to leave the area.
Shin Bet detains father of martyr Arkan Tha’er

The Shin Bet, Israel’s internal intelligence, on Friday arrested the father of Palestinian martyr Arkan Muzher, from Bethlehem, after summoning him for interrogation.

According to the Palestinian Prisoner Society (PPS), Tha’er Muzher received a summons for interrogation from the Shin Bet in Etzion detention center after soldiers stormed his home in al-Deheisheh refugee camp in Bethlehem.

Later, a PPS lawyer was informed by the Israeli security authorities that Muzher would remain in detention in Etzion center, without providing a reason for the measure.

15-year-old Arkan Muzher was killed by Israeli gunfire on July 23 during clashes between local youths and soldiers in Deheisheh camp.
Army Summons 20 Jerusalemite Palestinians For Interrogation

Israeli soldiers summoned for interrogation, on Friday evening, twenty Palestinians, including the Secretary of Fateh movement, in occupied Jerusalem.

The Palestinian New & Info Agency (WAFA) has reported that the soldiers summoned Fateh Secretary in the city, Shadi Mitwer, along with 19 other Palestinians, for interrogation for protesting the repeated and escalated invasions and provocative tours by colonialist settlers and soldiers into the courtyards of the Al-Aqsa Mosque.

WAFA added that the Palestinians were summoned by phone, and were ordered to head to the al-Maskobiyya interrogation facility, Sunday.

The summoning of the Palestinians for interrogation comes while more fanatic Israeli colonizers are calling for provocative tours into the Al-Aqsa Mosque, this coming Monday.
21 sept 2018
Ex-detainee transferred to hospital after being assaulted by IOF

The Israeli occupation forces (IOF) on Thursday afternoon transferred ex-detainee Jamal Karama to hospital after detaining him along with his wife and son, and physically assaulted him earlier on the same day. video

The IOF stormed Karama’s house at dawn Thursday, wreaked havoc on the furniture, and rounded him up with his wife and son after brutally beating him.

Later, the IOF released his wife on bail and decided to keep his son in detention. There is still no information if he and his son will be released.
Palestinian female prisoners boycott al-Fawra

Palestinian female prisoners, held in HaSharon prison, have continued to boycott the fawra period (time spent by the prisoners in the prison yard outside their rooms) for the 16th consecutive day, rights sources said.

The PA committee for prisoners and ex-prisoners’ affairs affirmed that the prisoners’ protest step came in rejection of Israeli Prison Service’s decision to install cameras in the prison yards.

31 Palestinian women and girls are currently held in HaSharon prison, in addition to 20 others in Damon prison.
20 sept 2018
Palestinian Writer Released from Prison after Finishing Sentence Over Poem

Israeli authorities released, on Thursday, Palestinian writer Dareen Tatour, aged 36, after completing her five-month prison term for a poem she wrote, and which Israel considered to incite to violence.

Tatour, from the town of Reineh, near Nazareth, in northern Israel, was detained in October of 2015, after she published a poem on social media entitled, “Resist my people, resist,” and included with it pictures of young Palestinians confronting heavily armed Israeli soldiers with stones and bottles.

After being held until January 2016, she was released and placed under house arrest until she was sentenced, in August 2018, to five months in prison.

After serving two months in prison and counting the three months she had earlier spent in jail, after her initial arrest, Tatour was freed, WAFA reports.
Palestinian student released after 7 months

Marshud, from the Balata refugee camp of Nablus, was detained by Israeli forces last March, after being summoned for an interview with the Israeli intelligence at the Huwwara Israeli military camp.

She was then transferred to an interrogation center in Petah Tikva, where she was sentenced to 7 months of prison for allegedly being involved in anti-occupation attacks.

Marshoud lives in Nablus with her sister and brother while the rest of her family reside in Saudi Arabia.
Israeli police arrest 10 Jerusalemites over al-Aqsa clashes

Israeli army declared in a statement issued Thursday the arrest of ten Jerusalemite youths for their alleged involvement in the violent clashes that erupted on July 27 in occupied Jerusalem’s al-Aqsa Mosque.

According to Maarif Hebrew newspaper, Israeli police arrested ten youths for being allegedly involved in smuggling fireworks into the holy shrine.

Four Israeli police officers were injured at the time, the sources claimed.

The Islamic Waqf Authority in Occupied Jerusalem said that the Israeli police allowed 93 Jewish settlers to enter the Mosque and tour its courtyards for about four hours.

The Waqf Authority added that the settlers provocatively performed Talmudic prayers under police protection at the Islamic holy site, whose Muslim guards intervened in an attempt to prevent them from doing so.

Meanwhile, the Israeli police arrested one of the Aqsa guards as he was trying to enter the Mosque as usual in the morning and then released him on bail. 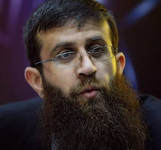 The Palestinian Prisoners’ Society (PPS) has reported, Thursday, that the administration of the al-Jalama Israeli detention facility, declined a request by one of its lawyers to visit with hunger striking detainee, Khader Adnan.

In a statement, PPS lawyer Saleh Ayyoub, said that Adnan is ongoing with his strike for the 19th consecutive day.

Ayyoub added that the PPS conducted all legal measures to arrange for this visit, but once he arrived at the facility, the administration claimed Adnan’s medical condition prevents him for visits.

The PPS said that Israel frequently prevents lawyer from visiting with hunger striking detainees, in addition to repeatedly transferring the detainees to various prisons, and constantly makes up justifications to prevent such visits.

It is worth mentioning that Adnan, 40, from Arraba town, near the northern West Bank city of Jenin, started the hunger strike on September 2nd, protesting his continued detention under Administrative Detention orders, without charges.

Adnan has previously held two major hunger strikes. One was a 66-day long hunger strike, in 2012, and another lasted 55 days, in 2015, in protest of his administrative detention.

In related news, the PPS said that three other detainees are also ongoing with hunger strikes; 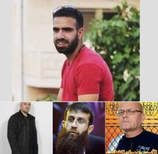 Omran al-Khatib, 60, from Jabalia in northern Gaza, started the strike 47 days ago, demanding early release after spending 21 years of a 45-year prison sentence, and is suffering from various health issues, including Coagulation, high blood pressure, a chronic stomach disease, high cholesterol and cartilage in the spine.

Detainee Jawad Jawareesh, 36, from Bethlehem, is protesting solitary confinement in Hadarim prison, after he was transferred there from Asqalan prison. He was taken prisoner 17 years ago, and was sentenced to a life term and 30 years in prison.

The third detainee, Ismael Oleyyan, 27, from Bethlehem, started the hunger strike three days ago, protesting being held under an Administrative Detention order.
Israeli Soldiers Assault Many Detainees In Ofer Prison

The Palestinian Prisoners’ Society (PPS) has reported, Thursday, that undercover Israeli soldiers assaulted many detainees in their room, in Ofer prison, built on Palestinian lands, west of the central West Bank city of Ramallah.

The PPS said the undercover officers of the “Israeli Prison Service” stormed room #9 of Section #15 in Ofer prison, and repeatedly assaulted many detainees.

It stated that ten detainees are held in the room, one of them identified a Mohammad Zaghloul, from the central West Bank city of Ramallah, and is serving a 20-year prison sentence, suffered numerous cuts and bruises to several parts of his body, including under his eyes.

Following the attack and injuries, the detainees decided to return their meals in all sections of the facility, to protest the violation.
Army Abducts Seven Palestinians In West Bank

Israeli soldiers abducted, on Thursday at dawn, at least seven Palestinians, including three members of the same family, from their homes in several parts of the occupied West Bank, the Palestinian Prisoners’ Society (PPS) has reported.

The PPS said the soldiers conducted extensive and violent searches of many homes, and interrogated several Palestinians while inspecting their ID cards.

It added that the soldiers abducted a former political prisoner, identified as Jamal Karama, in addition his wife Hana Misk, and their son Jamil, from Hebron, in the southern part of the West Bank.

The soldiers assaulted the family while searching their home; the property has recently been subject to frequent military invasions, and the soldiers also confiscated Jamal’s car.

Palestinian prisoner, Khader Adnan, aged 40, is on his 18th day of open-ended hunger strike, in rejection of his arbitrary detention.

Adnan, from Arraba town, in the northern West Bank district of Jenin, has previously went through two major hunger strikes. One was a 66-day long hunger strike, in 2012, and another lasted 55 days, in 2015, in protest of his administrative detention.

However, Adnan is not currently being held in administrative detention, according to Al Ray Palestinian Media Agency.

Israeli occupation forces had detained Adnan on December 11th, 2017 accusing him of incitement.

According to Adnan’s family, Adnan told his lawyer that Israel fakes charges to keep holding him in prison.

Adnan refuses to take the medical tests including weight, pressure, diabetes from the first day of the strike and he just drinks water.
Muslim guard at Jerusalem’s Aqsa Mosque arrested by Israeli police

Member of al-Aqsa’s supervision staff Hamza Nebali was arrested by Israeli cops near Bab Hitta and dragged to a detention center in Occupied Jerusalem.

On Wednesday, Israeli forces prevented Husam Sedr, a member of al-Aqsa’s reconstruction staff, from entering the site via Hitta Gate.

Chief of female guards department Zeina Abu Sbeih was also banned by Israeli policemen from entering the site and ordered to turn herself in for questioning at the Qishleh detention center in Jerusalem’s Old City.
19 sept 2018
PPS: Female detainees in Hasharon continue to protest security cameras

The Palestinian Prisoner Society (PPS) said that the Palestinian women detained in Hasharon jail insist on not leaving their cells to take their daily walk in the main courtyard in protest at the reactivation of internal security cameras.

According to the PPS, the security cameras in Hasharon jail were covered several years ago after female prisoners protested their presence inside their sections.

However, recently the administration operated them again after a committee appointed by Israeli security minister Gilad Erdan visited the prison.

There are still 32 Palestinian women in Hasharon jail and 20 others in Damon.
3 Palestinians abducted in West Bank campaigns

Palestinian Prisoner Society said that the IOF arrested Eid Abu Toyour, 18, from his house in Jalazone refugee camp near Ramallah.

The PIC reporter said that the IOF broke into the house of the Palestinian prisoner Khalil Jabarin, who carried out an anti-occupation stabbing attack a few days ago in Gush Etzion settlement, and wreaked havoc on it.

IOF soldiers assaulted Jabarin's family members and took the house's measurements in preparation for its demolition.

The IOF further stormed al-Birka area in Yatta town, arrested ex-prisoners Othman al-Yattawi and Abed Makhamra, and transferred them to an unknown destination.

Israel has recently thrown a cordon around Yatta town following an anti-occupation stabbing attack that led to the killing of an Israeli settler.

The Palestinian Prisoners’ Society (PPS) has reported that dozens of soldiers invaded the refugee camp, and searched homes.

The PPS added that the soldiers abducted Eid Khaled Abu Tyour, 18, and took him to an unknown destination.

The soldiers also installed several roadblocks near Ramallah, as well as other parts of the occupied West Bank, stopped and searched cars and interrogated many Palestinians while inspecting their ID cards.
Page:  9 - 8 - 7 - 6 - 5 - 4 - 3 - 2 - 1
Powered by