The Israeli occupation forces (IOF) at dawn Sunday kidnaped two Palestinian citizens after ransacking their homes in the West Bank.

A statement released by the IOF claimed that the two detainees were wanted for their involvement in resistance activities against Israel.

The IOF also raided at dawn student apartments in the north of Ramallah and interrogated students from Birzeit University about some of their friends who were arrested recently.
Soldiers Assault A Child, And Abduct Him, In Al-‘Isawiya 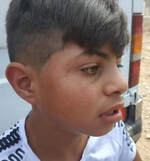 Israeli soldiers assaulted, Sunday, a Palestinian child in the town of al-‘Isawiya, in occupied East Jerusalem, and abducted him.

Local sources said the soldiers assaulted the child, identified as Nabil Mohammad Abu al-Hummus, 12, while he was walking to a shop near his home. video

They added that the soldiers then abducted the child and took him to a detention facility in Jerusalem, after alleging that he hurled stones at their jeep.

The soldiers also attacked the child’s father while he was trying to talk to them and was telling them Nabil is just a child who was going to the shop. video
Army Abducts Four Palestinians, Including One Woman, In West Bank

Israeli soldiers abducted, on Sunday at dawn, four Palestinians, including one woman, from their homes in several parts of the occupied West Bank, the Palestinian Prisoners’ Society (PPS) has reported.

The PPS said the soldiers invaded and violently searched many homes in the West Bank and interrogated the Palestinians while inspecting their ID cards.

The PPS office in occupied Jerusalem said the soldiers abducted Faiza Ziyada, from her home in the Old City.

It added that the soldiers also invaded homes in the al-‘Isawiya town, and abducted Nassim Amjad Mheisin, 20, and Mohammad Mousa Hamdan, 20.

It is worth mentioning that the soldiers abducted, on Saturday evening, a Palestinian woman, identified as Amal Hamad Bouziyya, in addition to Akram Jaber Abu Ya’coub and Makram Salah, from Kifl Hares village, west of the central West Bank city of Salfit.
14 sept 2019
IOF arrests 3 Palestinians near Salfit

They added that the detainees, whose identities have not been revealed yet, were taken to an undeclared destination.
One Palestinian kidnaped, MP summoned by IOF in W. Bank

The Israeli occupation forces (IOF) at dawn Saturday kidnaped at least one Palestinian citizen and summoned a lawmaker for interrogation during campaigns in the West Bank.

According to local sources, the IOF kidnaped 16-year-old Mohamed Hijazi from his home in Bethlehem city.

The IOF also stormed the house of MP Hatem Qafisha in al-Khalil and his relatives’ homes and handed him a summons for interrogation from the Shin Bet.

In Ramallah, the IOF broke into and ransacked a house in Deir Nidham village overnight, with no reported arrests.

On Thursday night the IOF broke into a mosque in al-Isawiya town in Jerusalem amid heavy firing of tear gas.

Local residents reported that three Palestinian worshipers choked on tear gas and were treated in the field.
120 Detainees To Join Hunger Strike As Tension Continues To Mount

Two days after 23 Palestinian political prisoners in Israeli prisons started a hunger strike, 120 others are planning to join the strike, especially if the Israeli Prison Authority continues to ignore their demands, including implementing what it agreed to in April of this year.

The detainees said that the prison authority continues not only to ignore their demands, but is also refusing to implement what it agreed to this past April, after it agreed to install public phones and to remove phone signal jamming devices, it installed in various prisons, which caused health complications to several detainees.

The Palestinian Prisoners’ Society (PPS) has reported, Thursday, that 23 detainees started an open-ended hunger strike two days earlier, after it became clear that Israel is not interested in implementing the agreement which was reached after their strike in April of this year.

The PPS added that it is unlikely that the prison service will agree to the demands in the coming hours, or days, especially since it continues to escalate its violations against them, to force them to stop the strike.

On Wednesday, the detainees gave the Prison Authority 24 hours to respond to their demands, including activating public phones for a trial period of five days, in addition to removing the signal scrambling devices.

The detainees are also demanding the return of the 23 detainees who were transferred from Ramon prison to Nafha, after they started a hunger strike, and to stop the provocative invasions and violent searches of their rooms.

It is worth mentioning that, in April of this year, the detainees carried out a series of protest measures, demanding Israel to stop the installation of the scrambling devices and to start the installation of public phones, and an agreement was reached in this regard.
12 sept 2019
Israeli police kidnap Palestinian girl from Issawiya

The Israeli occupation police on Thursday morning kidnaped a Palestinian young girl from her home in Issawiya district , east of Jerusalem, claiming she carried out a car-ramming attack.

According to 0404 website, a 20-year-old girl from Issawiya was arrested for carrying out a vehicular attack last night on a road near Atarot settlement in Jerusalem.

The Israeli police said last night that one border police officer and a settler were injured when a speeding car hit them, adding that they launched an investigation into the incident.
Ramon prisoners give jailers 24 hours to respond to demands

The Palestinian prisoners in Ramon jail gave the Israeli prison service 24 hours to respond to their demands during a meeting with prison officials on Wednesday.

According to the Palestinian Prisoner Society (PPS), the prisoners asked for activating the public telephones in the jail for five days, removing cancer-causing phone signal jammers, bringing back 23 prisoners who were transferred to Nafha jail, and stopping search raids on cells.

In the same context, 23 prisoners have been on hunger strike since Tuesday and five of them have stopped to drink water in protest at their exposure to violent suppression by prison forces.

Those hunger-striking prisoners were recently exposed to assaults by prison forces and transferred from Ramon jail to Nafha jail after they announced their intention to go on open-ended hunger strike in protest at not fulfilling pledges to improve the incarceration conditions, according to PPS.
Israeli Soldiers Fire Missiles Into Gaza

The Israeli Air Force fired several missiles into the Gaza Strip, on Wednesday at night, reportedly after shells were fired from the coastal region into Hof Ashkelon and Kibbutz Zikim, causing minor damage.

Media sources in the Gaza Strip said the Israeli army fired at least two missiles into a site, believed to be run by the al-Qassam Brigades the armed wing of Hamas in Beit Lahia, in northern Gaza, damaging it and causing fire.

They added that, just minutes after the first strike, the army fired missile into the same site, and destroyed it.

On Monday evening, the soldiers abducted two Palestinians, who reportedly breached the perimeter fence, in the southern part of the Gaza Strip, and claimed that the two carried knives and wire cutters.

Israeli sources said the Air Force fired many targets in northern Gaza after rockets sirens were sounded in Kibbutz Zikim and Hof Ashkelon Regional Council, close to the fence with Gaza.

They added that some of the sirens were later reported as false alarms, but said that, on Wednesday evening, a shell which was fired from Gaza, caused minor damage to a home in Hof Ashkelon.

On Monday at night, the Israeli army targeted fifteen sites in area in the northern and central parts of the Gaza Strip, and said that the targeted structures included “a weapons’ production structure,” in addition to “a compound for Hamas’s armed wing and a naval force center.”

The Israeli occupation forces (IOF) on Wednesday evening kidnaped two Palestinian young men during their presence in a southern border area of the Gaza Strip.

A spokesperson for the IOF claimed the young men infiltrated through the wire fence using cutters and were also found in possession of knives.

Every once in a while, the IOF announces the arrest of Palestinian young men from Gaza at the pretext of infiltrating through the border fence.
11 West Bankers kidnaped by IOF in dawn raids on homes

The Israeli occupation forces (IOF) at dawn Thursday kidnaped at least 11 Palestinian citizens from their homes in the West Bank.

According to local sources, the IOF kidnaped three citizens from the family of Abu Allan, including a woman, during raids on homes in ad-Dhahiriya town, southwest of al-Khalil.

The IOF also stormed al-Jalazoun refugee camp in northern Ramallah and Kafr Aqab neighborhood in northern Jerusalem and kidnaped two citizens from their homes. The citizens were identified as Tahrir al-Arayshi and Tahadi al-Tawkhali.

Six others were taken prisoners during IOF campaigns in different areas of the West Bank.

Soldiers Abduct Eight Palestinians, Including A Mother And Her Son, In Hebron And Bethlehem

Israeli soldiers abducted, on Thursday at dawn, eight Palestinians, including a mother and her son, in Hebron and Bethlehem governorates, in the occupied West Bank, the Palestinian Prisoners’ Society (PPS) has reported.

The PPS office n Hebron, in southern West Bank, said the soldiers invaded and searched several homes in the ath-Thaheriyya town, south of the city, and abducted Khawla Bader Abu ‘Allan, 50, along with her son, Ibrahim Adel Abu ‘Allan, in addition to Odai Shaher Abu ‘Allan.

It added that the soldiers also searched homes in the al-‘Arroub refugee camp, north of Hebron, and abducted a young man, identified as Moath Khaled Abu Sham’a.

The Wadi Hilweh Information Center in Silwan (Silwanic) said the undercover officers, wearing civilian clothes, infiltrated into the town, and abducted the teen, before taking him to an unknown destination.

It added that the regular army units invaded the town when the undercover officers invaded Obeid family home, and fired live rounds in the air, to prevent the Palestinians from approaching them, and withdrew from the town.
Page:  5 - 4 - 3 - 2 - 1
Powered by