The Israeli occupation authorities have been denying Jordanian detainee Hiba al-Labadi of family visits since her arrest at the Karame crossing over a month ago.

Labadi's family said in a statement on Tuesday that they have not been able to visit their daughter since her arrest on 20/8/2019 while crossing from Jordan into the occupied West Bank to attend a wedding ceremony of a relative in Yabad village, Jenin province.

They said in a press release that she has been held since then in Petah Tikva detention center and subjected to “cruel interrogation”.

They added that the Israeli interrogators failed to press any charges against Labadi, 30, which made them seek an administrative detention order against her that is to be announced within the coming 72 hours.

The family called on human rights groups to intervene and pressure the IOA into releasing their daughter and allowing them to visit her.
Israeli municipality demolishes house under construction in occupied Jerusalem 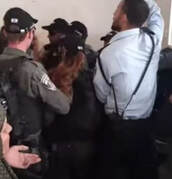 Staff of the so-called Israeli Municipality of West Jerusalem demolished a Palestinian house under construction in Mount of Olives neighborhood in occupied Jerusalem, said witnesse.

They said municipality staff, backed by Israeli police, cut the iron columns and destroyed the roof of the house owned by Issa Khalil.

Israeli police reportedly detained the owner and his brother after physically assaulting members of the family who were present at the house. video

Israeli Soldiers Demolish A Home, Assault The Family, In Jerusalem

Workers of the City Council of occupied East Jerusalem and Israeli soldiers demolished, Tuesday, an under-construction Palestinian home in the at-Tour town, allegedly for being constructed without a permit, and assaulted the family before detaining two of them.

Resident Abu Issa Khalil said the soldiers, and personnel of the City Council stormed the home after surrounding and isolating it, and assaulted his family, before abducting his sons Qussai and Issa.

It is worth mentioning that the two detained sons were interrogated for several hours at a detention facility, and were released under the condition of being forced out of Jerusalem for 48 hours.

He added that the soldiers alleged that his sons “assaulted them”, while they were forcing the family out, and attacked his other son, Odai, causing various cuts and bruises, before he was rushed to a hospital in Jerusalem.

The Palestinian stated that the soldiers demolished his residence using handheld tools because it is on the top third floor.

Khalil also said that the City Council recently informed him that he has until Monday evening to demolish the residence, and he demolished its rooftop, however, the soldiers invaded the area, Tuesday, and demolished the remaining walls.
IOF arrests 19 Palestinians in West Bank raids

Israeli occupation forces (IOF) at dawn Tuesday kidnapped 19 Palestinians after raiding their homes in different areas in the West Bank.

Local sources said that 19 Palestinian citizens were arrested in the districts of al-Khalil, Bethlehem and Qalqilya.

They added that violent clashes broke out in al-Khalil and Bethlehem during the raids. The IOF heavily fired tear gas canisters and live ammunition at the Palestinian residents but no injuries were reported.

Meanwhile in Qalqilya, the IOF imposed a curfew on Azzun town and forced Palestinian shop owners to close their stores for the third day in a row.

Israeli soldiers abducted, on Tuesday at dawn, fifteen Palestinians from their homes in the occupied West Bank, mostly from Hebron and Bethlehem governorates, the Palestinian Prisoners’ Society (PPS) has reported.

The Palestinian Detainees’ Committee has reported that around 100 Palestinian detainees in Israeli prisons started a hunger strike several days ago, protesting the installation of signal jamming devices that are impacting their health.

The Committee said in a statement that the Israeli Prison Authority rounded up the striking detainees from Ramon, Eshil, the Negev detention camp, and several other prisons, and transferred them to sections 1 and 3 in Nafha prison.

It added that Israel is subjecting the detainees to various violations, including psychological pressure, in addition to repeated invasions and searches of their rooms, to force them to end their strike without even negotiating their demands.

The Committee also stated that the detainees have basic demands, including allowing them access to public phones so that they can contact their families, in addition to lifting all sanctions imposed them.

It is worth mentioning that on September 10th, the detainees, especially in Ramon, started a serious of measures after the administration unilaterally voided the agreement which was reached with the striking detainees this past April, especially the removal of jamming devices and the installation of public phones.

The detainees held several sessions of negotiations with the administration, but their demands were rejected, and no progress was ever reached.
Soldiers Abduct One Child, Injure Many Palestinians, In Beit Ummar

Israeli soldiers invaded, on Monday evening, Beit Ummar town, north of the southern West Bank city of Hebron, abducted one child and injured many other Palestinians in the ath-Thaher area.

Local media activist Mohammad Awad, said the soldiers invaded the ath-Thaher area of the town, near the illegal Karmie Tzur colony which was built on Palestinian lands south of the town, and fired a barrage of gas bombs and rubber-coated steel bullets at protesters and homes.

Awad added that many Palestinians suffered the effects of teargas inhalation and received the needed treatment.

The soldiers also broke into a blacksmith workshop, owned by Jihad Ali Sabarna, and abducted his son, Mohammad, 15.

The Palestinian Detainees’ Committee has reported, Monday, that three detainees in Israeli prisons are ongoing with hunger strikes after one detainee ended his strike a day earlier following an agreement for his release.

In a press release, the Committee stated that the detainees are Ahmad Ghannam, ongoing with the hunger strike for the 72nd day, Ismael Ali, for the 62nd day, and Tareq Qa’dan, for the 55th day, rejecting their continued detention under the arbitrary Administrative Detention orders, without charges or trial.

It added that the Israeli Prison Authority, in cooperation with Israel’s Security Agency, is trying to force the detainees to end their strikes without adhering to any of their demands, by imposing a series of punitive measures against them, including repeated transfers from between various facilities, and solitary confinement.

Such measures are meant to keep the hunger-striking detainees from resting, and constantly impose more physical and psychological pressures on them.

It is worth mentioning, on Sunday, detainee Sultan Khallouf, 36, has suspended the hunger strike he started 67 days ago, after reaching an agreement with the Israeli Supreme Court setting December 15th of this year, the date for his release.
Over 50 Palestinians kidnaped by IOF in W. Bank and J’lem

The Israeli occupation forces (IOF) at dawn Monday kidnaped dozens of Palestinian citizens in the West Bank and Jerusalem.

Apart from the police arrests that took place in Jerusalem, a statement by the Israeli army said its forces arrested 29 Palestinians in the West Bank.

Among the detainees was the mother of prisoner Yazan Maghames, who was taken prisoner by Israeli soldiers at dawn from her home in Birzeit town, northwest of Ramallah.

Her son Yazan, a student at Birzeit University, was kidnaped by the IOF a few days ago.

The IOF also kidnaped Basel Filayyan, a Birzeit University student, from his home in Burham town in northern Ramallah. He was released recently by Palestinian Authority security forces after he was detained for two weeks.

Iteraf al-Rimawi, head of Bisan Center for Research and Development, was also among the detainees who were kidnaped from their homes in the IOF campaigns in the West Bank.

The police forces in Jerusalem also kidnaped two others from Silwan town, one from Beit Anan and another from Abu Dis town.

The Palestinian Prisoners’ Society (PPS) has confirmed that Israeli soldiers abducted, on Monday at dawn, at least 45 Palestinians from several parts of the occupied West Bank, including twenty-two from the al-‘Isawiya and Silwan towns, in occupied East Jerusalem.

The PPS said dozens of soldiers and police officers, including military and police intelligence Units, invaded al-‘Isawiya and Silwan town in Jerusalem, before storming and ransacking dozens of homes.

It added that the invasions and violent searches included the use of K9 units and that the soldiers also interrogated dozens of residents while inspecting their ID cards and violently searched their homes and property.

It is worth mentioning that, for the third month in a row, al-‘Isawiya has been subject to daily invasions, abductions, violent searches of homes and properties, excessively high fines and fees, in addition to several demolitions of homes and structures.

Silwanic added that the soldiers and police officers invaded many neighborhoods in Silwan, ticketed cars and other vehicles, in addition to imposing fines on shop owners, and interrogated many Palestinians while inspecting their ID cards.

During the invasions, the soldiers fired many gas bombs and concussion grenades at Palestinian protesters but did not cause injuries.

In Ramallah governorate, in central West Bank, the soldiers abducted four Palestinians in the neighborhoods of al-Masyoun and al-Masayef, in addition to Birzeit and Durham towns, north of the city.

Two of the abducted Palestinians, Yazan Maghames, from Birzeit, and Bassel Filyan, from Burham village, north of Ramallah, are students of Birzeit University.

In Tulkarem, also in northern West Bank, the soldiers abducted Amjad Wa’el E’mayyer, 31, Mohammad E’mayyer, 39, and Ali Younis Abu Younis, 46, from their homes in Bal’a town, east of the city, in addition to abducted Yousef Ghaleb Hannoun, from Anabta town, east of Qalqilia, while crossing a military roadblock near Jeet village.

The soldiers invaded many neighborhoods in Hebron city, in addition to Yatta and Beit Awwa towns, and installed roadblocks on main roads leading to the northern and southern parts of Hebron city, in addition to Sa’ir and Halhoul towns, before stopping and searching dozens of cars while examining the ID cards of the passengers.
Army Abducts Four Palestinians, Injures Many Others, In Ramallah

They added that many Palestinian youngsters protested the invasions, and hurled stones at the army jeeps, while the soldiers fired a barrage of gas bombs, concussion grenades, and rubber-coated steel bullets.

Medical sources said several Palestinians suffered the effects of teargas inhalation, in addition to cuts and bruises, and received the needed treatment.

The army invaded and searched homes, before abducting Yazan Maghames, a university student from Birzeit.

Another university student was abducted from his home in Burham village, north of Ramallah.
Hayya: Efforts being made to remove jamming devices from Israeli jails

In press remarks to the Palestinian Information Center (PIC), Hayya affirmed that there are ongoing contacts with UN, Qatari and Egyptian mediators to address the issue of cellphone jammers in Israeli jails.

He stressed the need to remove all jamming devices from Israeli jails and give the prisoners their legitimate rights fully as prisoners of war.
Detainee Suspends Hunger Strike After Court Set Release Date

A Palestinian detainee, held by Israel, has suspended the hunger strike he started 67 days ago, after reaching an agreement with the Israeli Supreme Court setting a date for his release. video

The detainee, Sultan Ahmad Khallouf, 38, from Burqin town, southwest of the northern West Bank city of Jenin, was taken prisoner on July 7th and has been held under arbitrary Administrative Detention orders without charges or trial.

He went on hunger strike 67 days ago, and only suspended it when the court set December 15th, 2019, as the date for his release, his wife said.

She added that her husband is currently at Kaplan Israeli Medical Center, facing various complications, including blurred vision and oral ulcers.

Since his abduction and imprisonment, the detainee was moved to several Israeli prisons and detention centers.

Prior to his abduction, Khallouf was receiving treatment to various health conditions, including slipped disc, raspatory issues, and hormonal imbalance, and requires constant medical checkups.